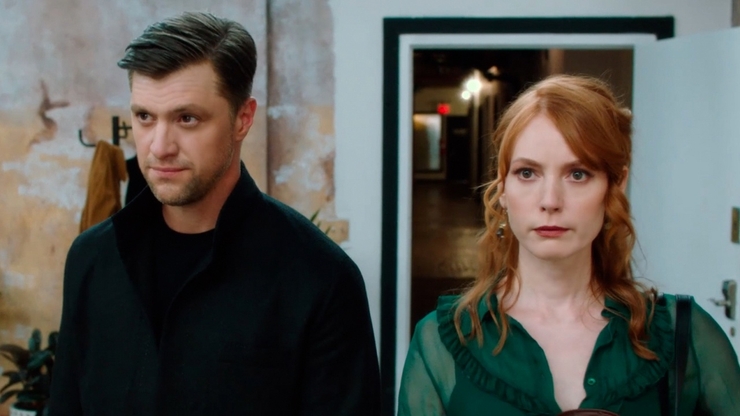 If you like your Jane Austen movies updated to current times, you might find some enjoyment in Modern Persuasion, which manages to blend the author’s Regency-era vision with such Millennial fixations as social media, romantic hook-ups and party-hardy attitudes with a 21st-Century version of working gal tropes.

Some loyal Austenites might ding filmmakers Alex Appel and Jonathan Lisecki for taking the author’s most melancholy and final tome about a spinster who believes her chances at true love are over and turning it into a giddy rom-com. They even dare co-opt probably the most sad-glad romantic moment ever as her heroine reads a letter from the man who got away as he confesses, “You pierce my soul. I am half agony, half hope.”

The good news is that they have recruited 40-something flame-haired actress Alicia Witt, she of Mr. Holland’s Opus, to play Wren Cosgrove, an ambitious workaholic who is wedded to her job at a marketing company based in Brooklyn. Her main companion is her cat Wentworth, whose name is a call-out to the source material. She is surrounded by a chatty and easily distracted by a bevy of less-grounded 20-something dark-haired office mates who are eager to mix work with pleasure.

Diversity is at the forefront at Keller Keller Lynch. One of Alicia’s bosses is a lesbian (Jenn Harris) whose Asian wife (Liza Lapira) is about to give birth at any moment. There is also a new hire in the form of a sassy Black receptionist (Adrienne C. Moore), who initially taken aback that the name of the firm starts with “KK” and ends with “Lynch.” Defying all good sense, she ends up as the squeeze of the dapper, witty and rich elder head (Mark Moses) of the company.

All is good until Wren’s professional world is suddenly turned up-side-down when she learns her college flame, Owen Jasper (Shane McRae), hires her firm to promote an app that involves a charity. It takes forever for the former couple to address that broken-hearted elephant in the room. That’s partly because her aunt (Bebe Neuwirth), who is a mother substitute for Wren, tries to set her up with an initially charming British playboy and she also connects with a sad lad whose girlfriend died from cancer and shares her love of woeful pop tunes of yore.

The script randomly cherry-picks from Austen’s story, including having a character suffer an accident and land in a hospital. Also, it turns out that Owen and Wren partly connected because of the shared admiration of the book of Persuasion. That, and a swoony text message, takes the place of Cupid’s arrow in this version.