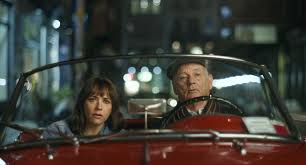 On the Rocks quietly offers an actor driven, simple story

Writer/director Sofia Coppola tackles recognizable, perplexing situations with observational skill. Through calm restraint that communicates volumes, she reveals complex characters who struggle with relationships. In her latest film, On the Rocks, Laura slowly but surely begins to suspect that husband Dean is having an affair with his assistant Fiona.

While Dean spends an inordinate amount of time working and traveling, Laura deals with their two young girls and the frustration of writer’s block for her overdue book. Her famous, art dealer father Felix fans the flames of distrust, intrudes into Laura’s life, and investigates his son-in-law. At her daughter’s school, Laura listens distractedly to the problems plaguing her friend Vanessa’s love life.

In less capable directorial hands, Coppola’s thin plot would offer little to contemplate, much less enjoy. However, Coppola writes as perceptively of Laura’s self-doubt and fears as of Felix’s patriarchal self-assurance, that trait a result of his globe hopping and money. None of this would work without the right actors and knowing how to present them. In that regard, the film succeeds impressively as Coppola showcases a trio of brilliant actors: Rashida Jones and Marlon Wayans as the couple, Bill Murray as Laura’s father, all of this played out against a distinctive New York backdrop.

The script is both clever and deceptively astute. I say deceptively because the subtext of numerous exchanges communicates volumes. In addition, Coppola clearly loves lingering on faces in silence, revealing emotional depths. Bill Murray, in particular, conveys Felix’s subtle humor, deep love for his daughter, and psychological truths. Felix says, for example, “We all just want to be loved,” a simple comment that Murray makes profound. He makes smelling a bouquet of flowers fascinating, and his exchange with police who stop his car bemusedly captures what it must at times have felt like for Sofia, the daughter of the iconic director Francis Ford Coppola. Rashida Jones plays perfectly off both Murray and Wayans, with a different energy for each.

Debates about men versus women and conflicting biological inclinations add interest. And the music, especially the Chet Baker songs, lend a rare poignancy to the nature of love itself. On the Rocks is quiet, restrained, and wonderful. Available now on Apple TV Plus.