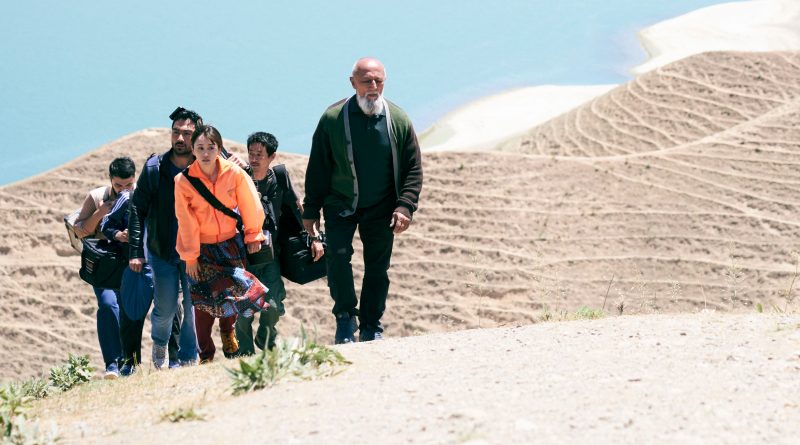 Seldom do films have as significant a catalyst as Japanese director Kiyoshi Kurosawa’s beguiling To the Ends of the Earth. Commissioned to celebrate twenty-five years of diplomatic relations between Japan and Uzbekistan and the seventy year anniversary of the gorgeous Navoi Theater, the story takes place in and around Tashkent, capital of Uzbekistan, as a Japanese TV crew gathers footage.

That group’s Uzbek translator Temur explains for them the history of the iconic Navoi Theater. As forced labor, Japanese POW soldiers captured at the end of WWII carved plaster intricately with knives as they constructed regional rooms and ceilings, an accomplishment Temur admires. He speaks of this theater as the reason for his choice to become a Japanese translator. But this and many other moments are quietly presented, trusting viewers to register the importance of such events for Uzbekistan and Japan while implicitly critiquing the film crew’s disinterest.

The main character is Yoko, adrift and most alive only on camera. Host of a travel show in Japan, she and her three person crew stage various scenes for eventual airing. However, little goes as planned. At a shoot on Lake Ayder they can’t catch the bramul, a mythical fish; Yoko’s must eat crunchy rice in the local dish because the preparer doesn’t have sufficient firewood to cook it fully; a deal to release a goat goes awry; a fun park ride looks more like torture; and a visit to the local marketplace ends disastrously. All of these metaphorical events push a plucky, adventurous Yoko, vivacious on camera, lonely off, to a crisis of leading to clarity, that is, understanding the most important connections and values. As Yoko, an endearing, engaging Atsuko Maeda is a pop singer in Japan, mirroring Yoko’s aspiration and inspiration for two lovely scenes, one of them an entrancing dream.

Writer/director Kurosawa clearly indicts the visitor who moves with blinders through these colorful and varied Uzbekistan landscapes. Yoko is chided that “our customs are not like yours.” To the Ends of the Earth raises consciousness of outsiders and appreciation of what truly makes life worthwhile. In Japanese with English subtitles, at KimStim.com.