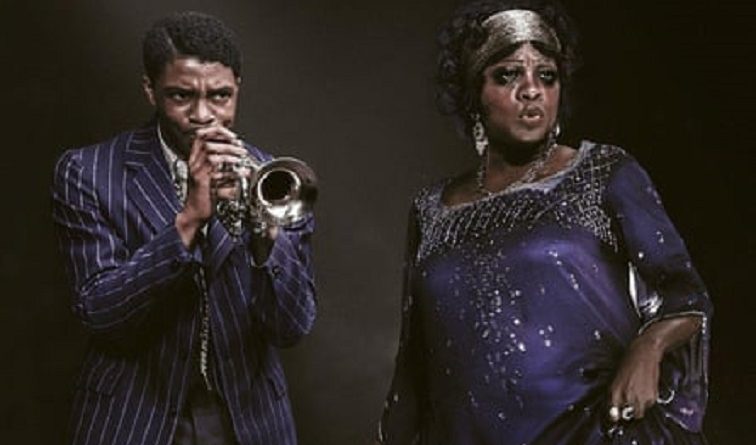 At the start of Ma Rainey’s Black Bottom, a grabber opening sequence leads us through the woods at night and into a tent where we witness a crowd getting down with the “Mother of the Blues,” her face and body glistening with sweat and her eyes rimmed with black kohl and silver dental work as actress Viola Davis inhabits the fierce soul diva’s bewitching steamy presence.

We also get to witness a preview of what is to come in the form of the late Chadwick Boseman’s final film role. The actor was best known for such heroic film roles including Supreme Court Justice Thurgood Marshall, baseball great Jackie Robinson and as T’Challa in Black Panther. So it’s a special kick to see him as the chatty and ambitious jazz trumpeter Levee (with Bradford Marsalis filling in on horn duty), who is cocky as they come and disrespectful to the other older musicians in the band.

If Levee with his cagey grin wants to do a solo on stage, he damn well will proceed to do so. He even has the nerve to make time with Rainey’s young girlfriend. But his cockiness is somewhat earned as he shows off his gifts for arrangements and writing more people-pleasing dance tunes. His ultimate plan is to ingratiate himself with his boss lady’s nervous white manager and a racist record executive in order to pursue a solo career.

Yes, George C. Wolfe’s adaptation of August Wilson’s play grows more theatrical and stagey after that as the film primarily takes place in the cramped quarters of a rehearsal room in 1927 Chicago where Levee and three other players await their queen.

The men share stories and argue about the racist treatment of Black artists past and present before they will proceed to the studio where Rainey will record her album. After several delays, including a car incident, technical glitches, a demand for bottles of Coca Cola for Rainey to eagerly gulp down and the superstar’s nephew who must conquer his stutter when reciting the opening intro to the song Ma Rainey’s Black Bottom. At that point, it’s all about the lady who sings the blues. There’s a snap, a crackle and a pop in the air and a momentous sense that stellar art is being created by this big-chested belter who holds sway over the white men who need to do her bidding.

As for the angry and naïve Levee, he’d rather obsess over a scratch mark on his new yellow shoes than show respect to his elders playing beside him. As for Rainey, she knows her voice is her sword and shield, and she wields them when needed. Meanwhile, Levee seems destined to be his own worst enemy at the end of the story, as tragedy strikes and his career plans fall apart.

Davis more than deserves her first lead actress Oscar nomination for her knock-out performance. But it is Bosman’s nervy and brave performance that will linger on your mind. It’s nearly assured his legacy will be honored with a posthumous lead actor spot on ballot. Bless the makers of this showbiz tale, including Denzel Washington — who is one of the producers and was a mentor to Bosman — for such a spectacular showcase of this actor’s artistry and talent.