It is a truth universally acknowledged that a Jane Austen novel in possession of a memorable heroine must be in want of a contemporary update. Which isn’t always a good thing, but, happily, Alex Appel and Jonathan Lisecki’s Modern Persuasion is sweet and charming enough to please anyone who relishes a good comedy of manners with a side of swoon-worthy romance. 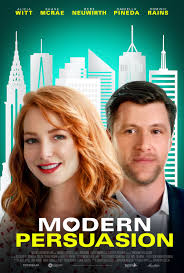 Austen’s novel — her last — centered on Anne Elliot, a 27-year-old spinster who never really got over Captain Frederick Wentworth, the fiance she misguidedly sent packing years ago. The film introduces viewers to Wren Cosgrove (Alicia Witt), a smart, disciplined woman who, under the mentorship of her Aunt Vanessa (Bebe Neuwirth), has spent her adulthood focusing on career over romance, which, in turn, has led her to success as a New York PR executive. She’s happy with her comfortable, well-ordered life … and then Owen Jasper (Shane McRae) walks into her conference room.

The two were in love long ago, but Wren broke things off when it seemed as though Owen didn’t have enough ambition or drive. But he went on to found a thriving company and now wants to hire Wren’s firm to help him launch a new initiative. As Wren and her colleagues — including social media-savvy Millennials Kate (Daniella Pineda) and Crystal (Tedra Millan) — spend the summer working on Owen’s campaign (and partying in the Hamptons), the two former lovers dance around the fact that both still see the other as the one who got away.

Leslie Combemale Modern Persuasion gives us another opportunity to watch Alicia Witt, an actress that sells just the right balance of cynicism and hope as lead character Wren Cosgrove. We also get a romantic lead that, while she looks decidedly younger, is 45 years old, and the story is as charming and delightful as the other 99% of films in which 20 or 30-somethings get these roles. Bebe Neuwirth plays her aunt and confidant Vanessa, and both she and Wren have successful careers and discuss lots of things other than men. A riff on Jane Austen’s Persuasion, it necessarily had to include them questioning their leaning into their careers over their love lives, but thankfully an unapologetic feminism sits at the root of both of their characters. A fun distraction in which, as is the way for rom-coms, all’s well that ends well. We need one of these for every hopeless, apocalyptic film being released, especially in 2020.

Pam Grady: Casting can sometimes be everything and such is the case with this wafer-thin but ultimately enjoyable modern-day adaptation of Jane Austen’s final novel. Alicia Witt is charming as 40-something New York marketing whiz Wren who is resigned to a life in which her cat Wentworth is her closest companion. But when the one who got away, college boyfriend Owen (Shane McRae), partners with her firm on a project, she has to wonder if there is a chance for that old flame to reignite. Framing the story as a kind of low-key satire on the difference in expectations (and cyberspace savviness) between millennials like Wren’s younger associates, Gen-Xers represented by Wren and Owen, and Boomers like Wren’s Aunt Vanessa (Bebe Neuwirth) and boss Grayson (Mark Moses) adds a touch of sly wit. The story is predictable and pure comfort food, the celluloid equivalent of mac-and-cheese, made tastier by the amiable performances of the ensemble cast. Oh, and that generational competition? Old pros Neuwirth (imperious) and Moses (hilarious) give their younger costars a masterclass in scene stealing. Well, OK, boomers!

Susan Wloszczyna: If you like your Jane Austen movies updated to current times, you might find some enjoyment in Modern Persuasion, which manages to blend the author’s Regency-era vision with such Millennial fixations as social media, romantic hook-ups and party-hardy attitudes with a 21st-Century version of working gal tropes, Read full review.

Nell Minow: The only storyline better than people falling in love is people who were once in love falling back in love. Jane Austen knew that in Persuasion and this remix uses some highlights from the book with some updates for the era of social media.

Jennifer Merin Directors Alex Appel and Jonathan Lisecki’s contemporary adaptation of Jane Austen’s beloved novel, is a well-crafted update that stars Alicia Witt as Wren Cosgrove, a successful 20-something lass whose career as a marketing executive is soaring while her romantic life is less than. Enter hunky new client, Owen Jasper (Shane McRae), who happens to be Wrenn’s long-forgotten high school crush. And the rest is — well, a Jane Austen-ish contempo romcom. Modern Persuasion is the latest on a long list of films that adapt or draw inspiration from Austen’s classics, and there is often some controversy among Austen devotees as to whether the filmmaker’s particular approach is quite appropriate. This girl-powered rendition slickly spoofs social media and the shallow self-preoccupation of addicted SM players while also addressing some of the more serious concerns of 20-something lassies — concerns that have preoccupied young women ever since back in Austen’s day and up until our own. And, particularly important for our current moment in hErstory, it’s fun. Now is the time for a little levity! So, enjoy!

Marina Antunes Directors Alex Appel and Jonathan Lisecki’s Modern Persuasion is far enough from Jane Austen’s classic novel to feel pretty much like a far distant cousin of the original. Alicia Witt gives a charming performance as Wren, a successful marketing executive who left her first love to pursue her career but gets a second chance at that love many years later. Witt is wonderfully lovable but Bebe Neuwirth and Adrienne C. Moore steal every single scene and overall, Appel and Lisecki’s take on the concept of second chances at first love is fun, lighthearted, and completely of the time.

Sandie Angulo Chen: Two hundred years after publication, Jane Austen’s novels continue to inspire modernizations and adaptations. Modern Persuasion, directed by Alex Appel and Jonathan Lisecki, updates the premise of Austen’s final finished novel, Persuasion, to it’s essence — a single woman, Wren (Alicia Witt), past her marriageable prime, is reacquainted with her first love, Owen (Shane McRae), after years of separation. The filmmakers include some of the subplots of the book, like the two younger women Owen flirts with (reimagined as Wren’s assistants instead of her cousins), Owen’s emo best friend who’s mourning and obsessed with melancholy New Wave lyrics (instead of Romantic poetry), and the opinionated and influential godmother who caused the titular persuasion, in this case played by the inimitable Bebe Neuwirth. Austen purists might balk at the changes, but those looking for an Austen-based rom-com will want to check it out, if only to keep track of all the similarities between Modern and the original.

Kathia Woods Modern Persuasion is contemporary take on the Jane Austen novel Persuasion. Young Ladies are trading launch parties instead of social balls. As in the center of all Jane Austen’s pieces of work women are reexamining their relationships with men as in Wren Cosgrove. Alicia is delightful as Wren however I can’t say the same for Shane McCrae as her ex-boyfriend Owen Jasper. The tension we look for in a Jane Austen based work was missing. We are more interested with Wren’s interaction with her other two love interests. Modern Persuasion had the potential to be an interesting, but it lacked energy. You have all these great characters, but they weren’t given anything interesting to do. The film does manage to have moments of fun such as Wren’s interaction with Adrienne C. Moore aka Denise. Another delightful moment was between Wren and Sam (Dominic Rains) connecting over a sad playlist. I wished the movie would have focused on more moments such as this. In the end Modern Persuasion ran out of gas.

Cate Marquis Modern Persuasion updates Jane Austen’s classic into a light hearted and very contemporary romantic comedy set in New York. Directors Alex Appel and Jonathan Lisecki make some playful changes – the grand English family fallen on hard times is now a once-legendary ad agency Keller Keller Lynch (in a variation on the name of their manor house Kellynch) now struggling, and the daughter everyone depended on, Anne, is now Wren (played winningly by Alicia Witt), the hardest working employee at the firm. Wentworth is now the name of Wren’s cat, while her old college boyfriend Owen, the one her aunt (a delightful Bebe Neuwirth) persuaded her to break off with, has re-surfaced as the wealthy owner of a successful tech business, and the big account that might just rescue the ailing ad agency. The romance still charms, the humor is broad, winking, and studiously millennial, but those who are not ardent Austen fans might want to brush up on the original to catch all the references.