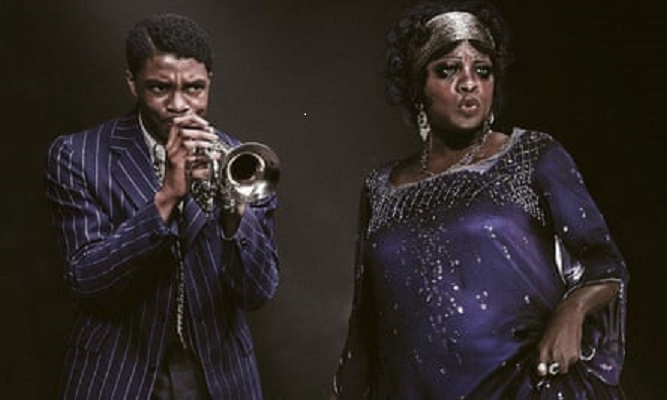 Ma Rainey, the Mother of the Blues, stands in the spotlight serenading the Black Bottom, a Twenties’ dance. But August Wilson put her there, and this film version of his play pays homage to him as much as it does to her. A third honor in this fine film goes to Chadwick Boseman in his last remarkable role.

Boseman waltzes onto the scene as Levee, a blazing Black trumpet player. He has arranged an up-beat version of Ma Rainey’s Black Bottom. A white producer promised the ambitious Levee that Rainey and her band will perform it. But the trombonist (Colman Domingo) dissuades Levee from any notion that Ma Rainey will let him mess with her song.

Ma is sure of her worth and her contribution to music. She does not suffer fools, she says “bark” in three syllables, and asks “Who is this ‘we’?” most rhetorically. She is imperious. Her steatopygia solidly balances her bosoms, as golden as freshly baked bread. The looks she shoots from her kohl-messed eyes hold as much flame as Levee’s trumpet. As portrayed by Viola Davis, Ma Rainey is a force, but one who listens to her heart.

Boseman as Levee commands attention. Whether he knew this role would be his last before succumbing to cancer matters little, for his signature was giving his all to his acting. Especially powerful is Levee’s monologue on his mother’s rape and on “not being spooked up by the white man.”

Those words were penned with the flame of Ma’s looks and Levee’s trumpet by August Wilson. He had a point or two to make about music (“This would be an empty world without the blues”). He speaks to women’s power, the crush of black artists by white producers, to ensembles and scars, transference and violence.

Director George C. Wolfe conducted this play fiercely and knowingly. As for people, he locked down his camera on Boseman’s face as the trumpeter listens covertly to others’ lip-flapping and tells the tale of Rev. Gates. For producing, Wolfe moves close to the pressing of sillions in a wax record. Wolfe, aided by Tobias A. Schliessler’s cinematographry, honors Wilson’s playwriting and Ruben Santiago-Hudson’s scriptwriting as Branford Marsalis’ music moves the play on to the screen.

The film runs 94 minutes. Every single minute matters, especially the last 10. There’s no looking away from these musicians.