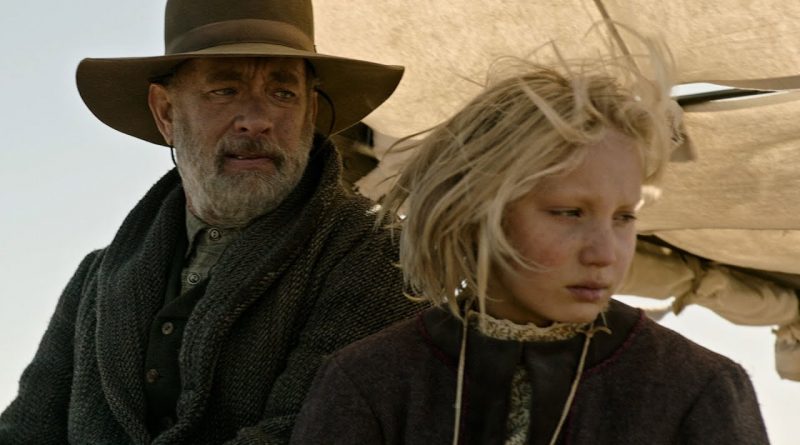 News of the World travels in 1870 to return a kidnapped girl.

The most identifiable American genre, the western, is fully realized in co-writer/director Paul Greengrass’ News of the World. But as welcome as the 1870 setting and the beautiful widescreen compositions are, the film lacks Greengrass’ usual dynamic energy. That’s surprising since News of the World reunites Greengrass with Tom Hanks who partnered to make Captain Phillips thrillingly suspenseful.

Known also for three of the Jason Bourne films, Greengrass certainly knows how to pace a story, action alternating with quieter times. But the serial, dangerous encounters here feel calculated and plotted, results quick and predictable. The plot is anchored in Confederacy veteran Captain Jefferson Kyle Kidd, as he introduces himself several times, traveling from one North Texas town to another, making his living reading newspapers to gatherings of local residents, hence the title, News of the World.

Along the trail, he discovers a Black man hanging from a tree, a “This Is White Man’s Country” warning, and a terrified, eleven-year-old white girl. Kidnapped five years earlier, she’s fully Kiowa now and speaks no English. A cavalry officer directs Kidd to take Johanna, as Kidd names her, to an aunt and uncle many miles away. Without an Indian agent scheduled to visit the nearest town for months and unable to find anyone else willing, Kidd and Johanna head to her relatives’ home.

The road trip unfolds through Herculean trials. Three despicable men want to buy Johanna for their pleasure and follow Kidd into hill country where a well-staged shootout occurs. Black, Indian and Mexican men boil buffalo carcasses in another town where a narcissistic tyrant, who massacres Indians and bison, wants only his achievements read, leading to Kidd prompting a workers’ revolt and another shootout. A wagon races wildly out of control, a dust storm engulfs the two, and more. Adapted from Paulette Jiles’ 2016 novel, events clearly comment on today’s problems: racism, sexism, animal slaughter, and a narcissistic bureaucrat.

Tom Hanks as the noble Captain delivers his always appealing self, a true pro who can professionally represent any character convincingly. As Johanna, Helena Zengel adds an appealing, spunky presence. However, revisiting familiar terrain, as accomplished as this filmmaking is, News of the World has an uphill battle to surprise and please. At select theaters beginning December 23 with later on demand availability.