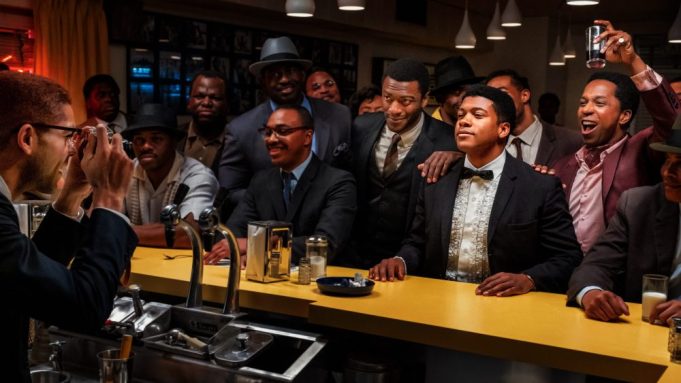 It has been clear for a while that Regina King was headed for feature film direction, and she found a great and compelling subject in the historic night in 1964 when Cassius Clay (soon to be Mohammad Ali), Malcolm X, Sam Cooke, and Jim Brown spent the evening together after Clay defeated Sonny Liston at the Miami Convention Hall. Screenwriter and playwright Kemp Powers adapted his award-winning play and King populated her film with a powerhouse cast that shines both individually and as an ensemble.

It’s hard to single out one performer that stands above the rest, because while all the co-leads inhabit their characters well, their portrayals are most fully formed in their interactions with each other. Leslie Odom Jr so fully channels Sam Cooke that you’d be hard pressed to tell them apart vocally when Odom Jr takes the stage and sings Cooke’s songs. Though it’s Odom Jr who is getting all the awards buzz, it’s Kingsley Ben-Adir as Malcolm X that will most impress. He plays him with passion, and vibrates with nearly the level of magnetism that made Malcolm X such an indelible 20th Century figure. One speech in particular should have Oscar voters’ tongues wagging. It can’t be easy to play Muhammad Ali, given all the idiosyncratic qualities the famed boxer was known for, but Eli Goree definitely captures his flamboyant spirit, while at the same time making him a grounded, flesh-and-blood man with emotions, dreams, and ambitions that will make him relatable to viewers. Fans of Aldis Hodge, many of whom have championed him since his time on the show Leverage, will once again see the actor stretching and showing a new side as the quietly powerful Jim Brown. Together, these four performers show what supporting and holding space for each other can create in terms of ensemble work.

Regina King has been on fire lately, winning an Oscar and Emmy as an actress, but she has as much a love for being behind the lens as in front of it. Known for her meticulous research and her easy way with the casts on her projects, it’s wonderful to see she has the same talent in features as in the many projects she’s helmed on the small screen. She is also committed to inclusion and parity, something she spoke about in her Golden Globes speech where she made a public pledge that 50% of her future productions will be comprised of women. Sometimes a woman is the best for the job, as exemplified by the work of Cinematographer Tami Reiker on One Night in Miami.

While the story focuses on these four famous men and their experiences that famed evening in 1964, One Night in Miami proves to be very of this moment, and what Malcolm X speaks about in terms of standing up for change, and Sam Cooke sings about with A Change is Gonna Come feel like a call to all of us here in 2020 to demand it, protest for it, and vote for it. The same injustices are still happening, and based on what we’ve seen in the US in the last 4 years, we’ve got a lot of work to do to create a world that these legends were fighting for all those years ago. The film is also unapologetically Black, and celebrates Black excellence, which is welcome in a year when there has been so much rhetoric laced with thinly veiled racism.