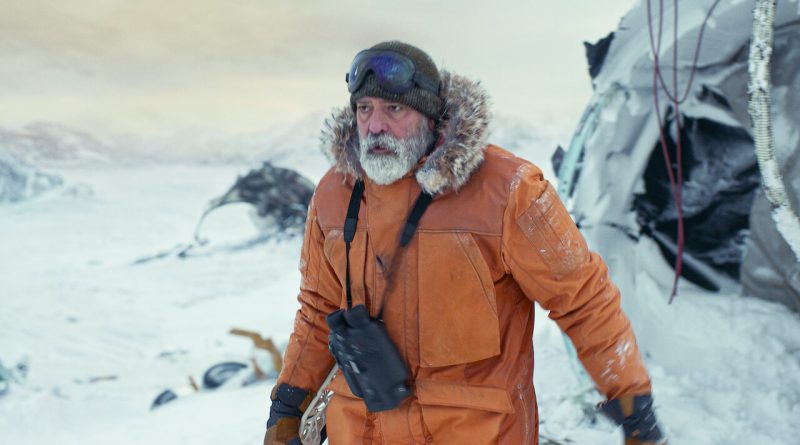 In 2049, Earth is destroying itself. When the maintenance crew of a remote outpost on the Arctic Circle departs to face doomsday at home with their loved ones, terminally-ill Dr. Augustine Lofthouse (Clooney) remains at his post, eating a microwaved meal in the deserted cafeteria.

Scanning radio frequencies, he discovers there’s a returning spaceship headed toward Earth after scanning a habitable moon of Jupiter, a celestial ‘safe haven’ that Augustine discovered. If he cannot urge them to return to Jupiter, human civilization is doomed to extinction.

While he’s roaming the now-deserted base, Augustine discovers he’s not alone. There’s silent, seven year-old Iris (Caoilinn Springall), who was apparently left behind when the staff departed. Reluctant to care for a child, grizzled Augustine mutters, “I’m the wrong person.”

Soon, Augustine must take Iris on a perilous trek across the icy wasteland to reach a weather station with a stronger radio signal. Scenes alternate between them and the astronaut crew (Felicity Jones, David Oyelowo, Kyle Chandler, Demian Bichir, Tiffany Boone).

During the course of the intimate, meditative story, Clooney touches on regret and redemption, focusing on familial responsibility and the conflict between making time for love and pursuing a career, punctuated by Alexandre Desplat’s evocative score.

Problem is: it’s quite predictable.

It should be noted that dedicated cast/crew, headed by German cinematographer Martin Ruhe (Catch-22), battled Iceland’s 50-mile-per-hour winds and 40-below-zero temperatures. Plus, they discovered only after filming began that Felicity Jones was pregnant, so they cleverly integrated that essential element into the plot.

On the Granger Gauge of 1 to 10, The Midnight Sky is a desolate, dystopian 7. The resounding desire for human connection is particularly relevant during this pandemic.