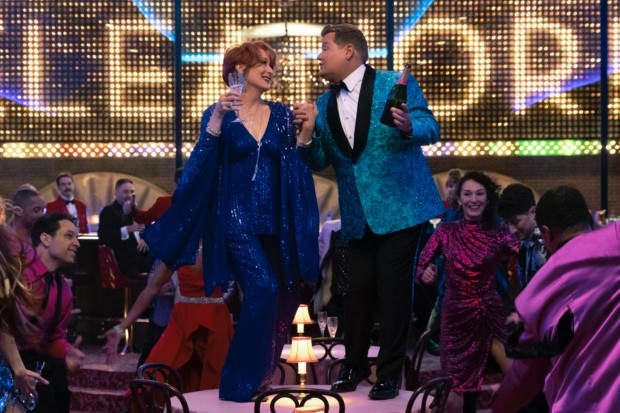 Let’s face it: Broadway’s The Prom was a mediocre musical – at best. So director Ryan Murphy wisely loaded the Indiana high-school girl’s plea for inclusion and love with the best cinematic talent available.

The plot was actually inspired by real events. In a small, conservative town in Indiana, Emma (Jo Ellen Pellman) is forbidden to take her ‘secret’ girl-friend Alyssa (Ariana DeBose) to the prom.

When her dilemma is reported on Twitter, four Broadway stars – who are suffering from their own recent rejections – travel from New York to the Midwest try to garner favorable personal publicity by protesting on her behalf.

Playing Dee Dee as though she’s Patti LuPone, Meryl Streep is hilarious, but – for me – Nicole Kidman is perfection personified, proving once again that she’s one of the screen’s most exciting and versatile actresses.

Working from a splashy screen adaptation, co-written by Bob Martin and lyricist Chad Beguelin with a score by Matthew Sklar, Ryan Murphy (Glee) delivers sequin-studded caricatures, rather than empathetic characters.

Even more curious than the casting of heterosexual James Cordon as a gay icon was choosing Kerry Washington, who lacks any sense of comedic timing, to play Alyssa’s smugly bigoted mother/PTA president Mrs. Greene, proclaiming, “This isn’t America; this is Indiana. This is about big government taking away our freedom of choice.”

Keep an eye out for Everybody’s Talking About Jamie, the screen adaptation of a London stage hit, set for release in early 2021. It’s a comparable concept except there’s more focus on the angst-riddled teenagers.

On the Granger Movie Gauge of 1 to 10, The Prom is a feather-weight, flawed and forgettable 5 – proving it’s possible to be brazenly bland.the prom –