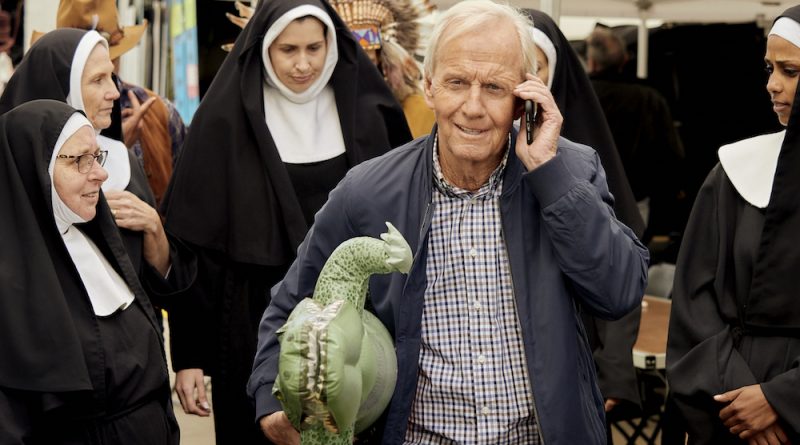 Back in the mid-1980s, cheeky Australian comedian Paul Hogan became an international superstar with Crocodile Dundee, earning a Best Original Screenplay Oscar nomination which led to a co-hosting gig at the 1987 Academy Awards.

Suddenly, his agent/manager (Rachael Carpani) summons him, telling him that the Queen wants to bestow a knighthood upon him for services to comedy. (The fact that Australian citizens no longer receive this honor is ignored.)

At first, Hogan is reluctant but he’s encouraged to accept this honor by his young granddaughter (Charlotte Stent), who‘s making her stage debut in a school play in Australia.

That’s the beginning, middle and end of anything that makes a shred of sense, including a splashy musical number about a knife.

Riding the upcoming publicity bandwagon, some studio nitwits want Hogan to revive the Dundee character with Will Smith as his son. When Hogan points out the obvious, the tabloids accuse him of racism. That’s amplified when he mistakenly appears at the Black Talent Awards, instead of a fundraiser for underprivileged children that’s been organized by Olivia Newton-John.

Sloppily scripted by Robert Mond and director Dean Murphy, the ‘son’ concept gets dropped, even though amiable Jacob Elordi’s right there – waiting to be summoned.

Instead, there are slapstick bits as hapless Hogan socializes with Chevy Chase, plus John Cleese as Hogan’s unlicensed ‘Uber driver’ and Wayne Knight as his annoying, unwanted houseguest.

In a preposterous subplot, genial Hogan befriends an aspiring paparazzo (Nate Torrence), looking for celebrities. None of this is even remotely funny. Indeed, it’s rather pathetic, as are cameos of fellow Aussies Luke Hemsworth, Mel Gibson and Jim Jeffries.

On the Granger Movie Gauge of 1 to 10, The Very Excellent Mr. Dundee is a disappointing 4 – a sad self-parody.