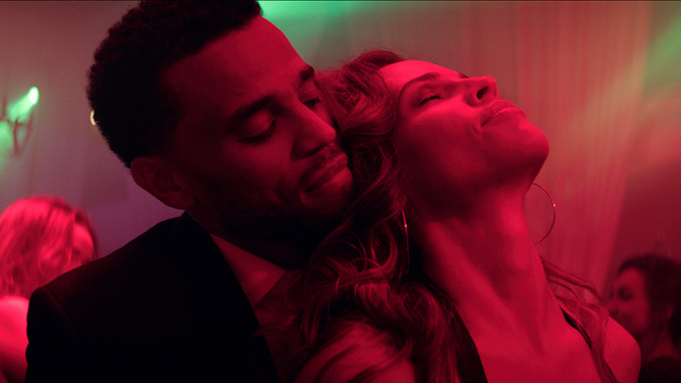 As the titular femme fatale, Hilary Swank seems ready to boil a bunny in this pulpy-noir thriller.

But his marriage to truculent Tracie (Demaris Lewis), a real estate agent, seems to be floundering, and he’s disappointed that his best-friend/business partner Rafe (Mike Colter) wants to sell their company to William Morris Endeavor at a huge profit.

On a trip to Las Vegas to attend a bachelor party, Derrick ditches his wedding ring and embarks on a one-night stand with tempting Val (Hilary Swank) whom he meets in a bar – obviously banking on the slogan: “what happens in Vegas, stays in Vegas.”

Soon after, there’s a violent home invasion in which a masked man tries to kill Derrick. Summoning the police, he is stunned to discover that the LAPD detective in charge is Val – actually, Valerie Quinlan, who has problems of her own. She’s fighting her nasty, politically-connected ex-husband (Danny Pino) to regain custody of their young daughter.

Scheming, spiteful and obsessed, psychopathic Val is determined to leave a wake of destruction wherever she goes, telling Derrick: “Our actions have repercussions…You used me in Vegas. Now I’m gonna use you.”

Problem is: two-time Oscar winner Hilary Swank (Boys Don’t Cry, Million Dollar Baby), who also served as a producer, is decidedly unsexy in a role that calls for a sultry, seductive quality that she’s apparently unable to summon.

Formulaically scripted by David Laughery, perhaps as an update to Fatal Attraction/Strangers on a Train, it’s a murky melodrama, mis-directed by Deon Taylor (The Intruder) with a distracting subplot involving Derrick’s ex-con cousin (Tyrin Turner).