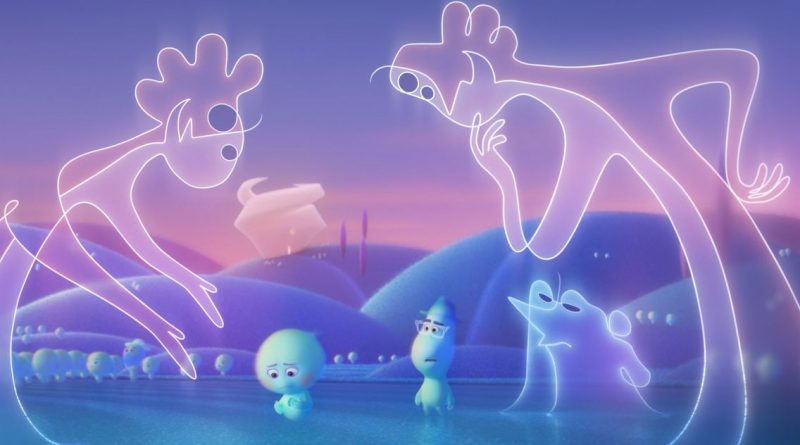 If one thinks of animated films as largely for children (and, of course, one would be wrong), one will have to deal with whether the Pixar film, Soul, is at all appropriate for — or even appealing to — children. But children delight in only what they want in animation, leaving the rest for adults.

So the other-worldly plot of Soul may escape them. The film’s title also plays off the pun of “soul” to describe music that incorporates rhythm and blues plus a gob of gospel. Jon Batiste’s soul music fills the film the way his long, brown fingers — so well drawn — cover the piano’s 88 keys.

The sound at the start, as practiced by a middle school jazz band under the direction of Joe Gardner, strays far from harmony — except for Connie’s blowing her trombone. Joe, his eyes set close, really wants to play piano in a jazz band rather than teach, so when he gets the chance to audition for the great Dorothea Williamson, he jumps. He zones out ad libitum, his soul lingering on the music. “Get a suit,” the saxophonist commands. “Sound check at 7.”

Thrilled, but fearful at telling his hard-working mother that he got the gig in show business, Joe dances off. He does not regard the city infrastructure that puts a sewer lid in his path. He falls. But does he die? Is his body in a holding pattern? Can he meld body with soul?

Those questions govern the rest of the film, the first Pixar movie not released in theaters but streamed. Pete Doctor (“Up”) explored whether people are destined to be who they are by going to a place beyond time and space. Doctor directed “Soul” with Kemp Powers, Pixar’s first Black co-director, who also co-wrote with Mike Jones. Among the four, Doctor desired to make the film as much about jazz as about about eschatology, that is, the study of death and the soul, Heaven v. H-E-Double Hockey Sticks.

When the film concentrates on Joe (Jamie Foxx) and his mother (Phylicia Rashad), on Dorothea (Angela Bassett) and Curley (Questlove), it succeeds more than when it becomes a celestial haven of “counselors” in linear shapes á la Klee. Among the lost souls is the voice of Tina Fey as 22, still trying to find its purpose.

Soul has a lesson, one children can afford to learn, about our purpose in life, about our spark, about our music. While the film’s concentration on Black artists, on female brass players, and on avoiding Black stereotypes is commendable, its falling into the Great Beyond is questionable.