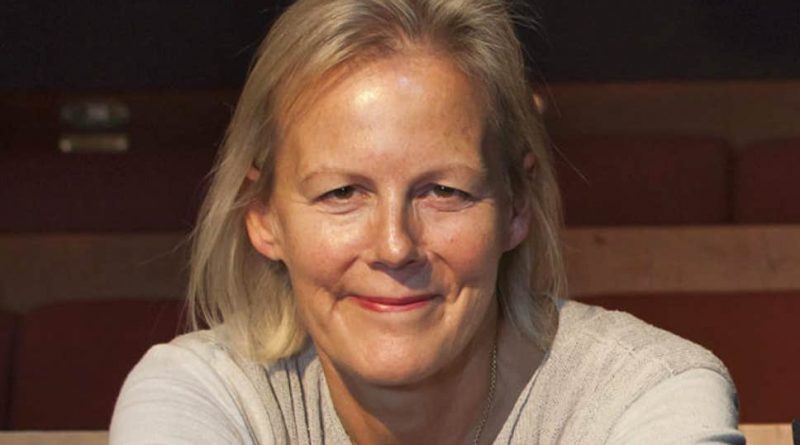 Phyllida Lloyd has long been committed to supporting and promoting women in film, theater, and opera. From early in her career, she has placed women in traditionally male-centered stories or focused on the female perspective, creating conversation about women’s place in the power positions of history and literature. This included premiering the opera based on Margaret Atwood’s novel The Handmaid’s Tale, and versions of Shakespeare plays featuring female casts at London’s Donmar Warehouse, in which famed British actress Harriet Walter played Brutus in Julius Caesar, the lead in Henry IV, and Prospero in The Tempest, all in a single day. In 1999, she directed the ABBA musical Mamma Mia!, which proved a huge hit. 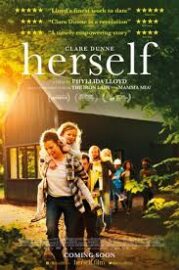 That led to directing the film adaptation in 2008 starring Meryl Streep, making Lloyd a female filmmaker that instantly broke box office records. It became the biggest grossing film at the UK box office ever, putting her in rarified air for women working behind the camera anywhere in the world. She also helmed The Iron Lady, which won Streep the Academy Award for best actress.

Lloyd’s new film Herself is by far the smallest, lowest budgeted film she’s ever worked on. As part of directing the indie film, she required Clare Dunne, the film’s screenwriter, with whom she had worked many times before onstage, would be the star of the film she penned. AWFJ.org spoke to Lloyd about her new film, how it furthers her commitment to put women in front of and behind the camera, and amplifies the experiences of women in an authentic way.

Leslie Combemale: You described Clare’s audition for your Julius Caesar as “seeing an actor who is completely themselves, who closes the gap between themselves and the character”, which is that’s exactly what both she and Harriet Walter do in their portrayals. Since you and many of the cast come from stage, did you rehearse? What was the preparation like for the shoot?

Phyllida Lloyd: We did rehearse, but not a huge amount in comparison with what we’re used to working in the theater where we have weeks and weeks of going down blind alleys and experimenting in a magical way. In a way it was quite economical, because we had a bit of rehearsal, but there was so much trust between us and a sort of shorthand, that we were able to work quickly, which we had to do because we only had 5 weeks. I think the thing was that Clare had this character so much under her skin, she knew so much of who Sandra is. Of course there were places where I would push her harder to go further or rein her in or just really try to get the maximum amount of stretch or modulation in what she was doing. It was really about building around her an ensemble of actors who I knew could rise to her level of actual truth where you couldn’t see the artifice, and that wasn’t just the adults, that was the children too. I really wanted to fill the world around her with an authenticity where you could ask if they were actors or if what you were seeing was actually happening.

Combemale: Can you take us through a bit of your collaborations with women below the line on Herself: production designer Tamara Conboy, editor Rebecca Lloyd, costume designer Consolata Boyle and composer Natalie Holt and some of the challenges each had to tackle?

Lloyd: I feel very proud that we managed to get to a 50/50 gender split from the units, and my hope is that with my next film it will go to 60/40 or better. I feel proud, because I’ve come a long way from my first day of production on Mamma Mia, when I walked onto the James Bond stage at Pinewood and there must have been a hundred and fifty men greeting each other saying, “good morning, sir’ and ‘good morning, governor’, and almost saluting each other, and feeling like I had landed on Mars in a way that I wasn’t used to quite so much in the theater. So it was really important to us and our producer Sharon Horgan who was very much a part of the feminist mission of this. I think I chose the best editor and the best for each for each unit. I was trying to build a crew that had a lot of women in it but in the end I felt I’d chosen the best people. It made for a very.. there’s an Irish word, ‘meitheal’, when neighbors come together to accomplish a task or to roof their barn, and I think that spirit of meitheal went right through the crew and the presence of women on the unit or heading departments, our first assistant is also a woman and she is the one calling the shots literally on the unit. I think it created a very collaborative invested calm, quiet, peaceful, with no shouting whatsoever kind of set. I believe that always how you work is as important as the work you do.

I learned that early on in theater, but it was reinforced for me mightily by Meryl Streep whom I watched demonstrate that, that how you conduct yourself can be literally change the atmosphere and the world around you. I think that women are good at bringing the temperature down and don’t need to swagger about and do lots of shouting and screaming to get something done. We didn’t have time for it. We just had to be very economical.

With the women that headed up the departments, Rebecca is an amazing editor, she did a fantastic job, she’s like a fish in the sea, in her element. She was a wonderful find. My relationship with Consolata Boyle goes back quite a way. She did the costumes for Meryl Streep in The Iron Lady so we had a very established relationship, so it was a combination of old and new collaboration. It did created a very harmonious unit. With Natalie Holt, it was the first time I worked with a female composer, and that was another case where I set out very deliberately to find a female composer to work on this. The conversations that we had amongst us, people often ask if a movie could be directed by a man, I don’t mean in reference to Herself, but it is a question that comes up often for me, and I think that yes, it could have been, but it comes down to a sort of empathy, and a lot of these women who were on the unit were mothers and really empathized with Sandra and we all thought that ‘There but for the grace of God’ it could be any of us in her situation, and particularly now during the pandemic, and especially now during the pandemic. Some of us feel safe in our homes, and thousands of people feel very unsafe. Where do they go? Where do they go anyway, but where do they go especially during a global pandemic if they leave? So this question that comes up in the courtroom of why she didn’t leave him sooner, and we’ve got to stop asking that question. As Clare says in the script, “ask better questions.” 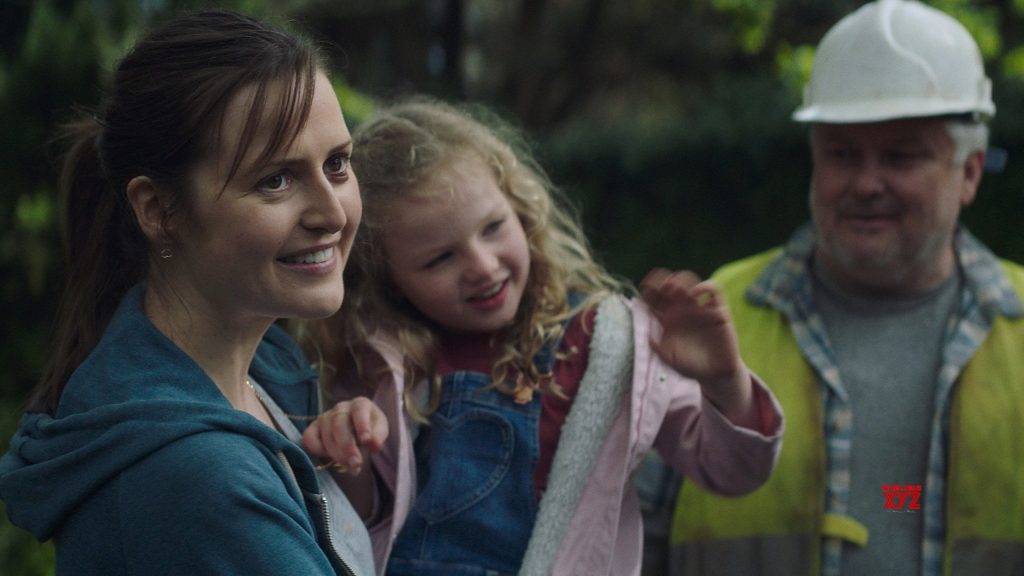 Combemale: I love the metaphor in which literally building her own house is building back Sandra’s sense of herself. —it’s transformative. I remember seeing visual representations of that struggle to build again, like when she is dealing with her hand or finally asking for help. What kinds of discussions did you have around that?

Lloyd: The whole film is made up of fragments, details, and tiny shifts that, when you talk about the female gaze, we women are interested in pulling that curtain back, that veil back, and looking at these fragments of things and the physical life which has been minutely researched, like the issue of nerve damage and what it takes to recover from that, and what the impact would be on that kind of injury to lift heavy machinery and using big tools. We were talking about how she’s going to build a house with her injured hand and which hand should be injured, we thought about it all. What does it take to heal? There is a moment that many won’t notice after the fire when she’s lying in bed in a kind of trauma and in one of the nightmares she tears the cast off her hand in the night. That’s the thing she’s been wearing the whole film. In the last scene, when she comes into the field with the children is the only time she’s not wearing it on her hand. These are details the audience will only see very subliminally, but all of it was very preciously and carefully mapped.

Combemale: One of the most urgent aspects of the release of this film is the horrible rise in domestic abuse during the pandemic. That gives it all the more relevance as does the economic divide that means a worsening of the housing crisis and many hardworking women getting pushed further down into poverty. But it is also a story of hope.—What are you hopes for the film in terms of how it inspires people or opens their perspective?

Lloyd: When I first read this screenplay, I thought Clare knows these women. We’d also been working with women in prison in our all female company and met so many women who started in the justice system in child services and domestic violence, we’ve all read stories or seen movies that touch on this subject, but I hadn’t read one that is speaking not just to those of us who can lobby and advocate for social change, she’s actually speaking to women themselves. I don’t know that a movie can save lives, but a woman who is in this situation who saw this movie might feel heard or seen, and might feel if she takes that fist step, walks over that threshold to leave, maybe there is a world a community a possibility we were urged by a someone at a charity women’s aide in Dublin, someone who works there, to focus on the victim but take them towards their recovery because many women who leave do recover and move on to safe and better lives. I hope that the message is twofold: that those of us who are lucky, be better neighbors in all respects, and those of us who are not so lucky, think that maybe there are neighbors in the community that will reach out a hand to you.