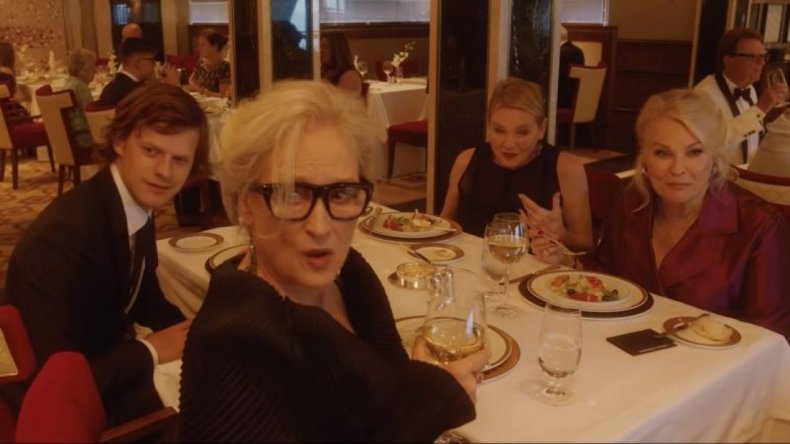 Let Them All Talk showcases conversation on a transatlantic crossing.

Director Steven Soderbergh takes a casual approach in his latest film, Let Them All Talk. In fact, so casual that his cast improvised the lion’s share of the interactions, spontaneously expressing what they thought and felt. When the three central actresses are Meryl Streep, Candice Bergen, and Dianne Wiest, that’s not too risky a venture, though conversations often meander.

The setup is a two-week transatlantic crossing, don’t call it a cruise, of the Queen Mary 2 from New York to England. Alice Hughes invites Susan and Roberta, two long-time friends, to accompany her and her nephew Tyler. A Pulitzer Prize winning author on her way to accept another award in London, Alice spends more time working frustratedly on her new book than with her friends. Meantime Tyler (Lucas Hedges) is enamored of Alice’s publisher’s agent Karen (Gemma Chan) who has clandestinely reserved a cabin.

Both Susan and Roberta have distinctive, multifaceted personalities. Susan (Dianne Wiest) works in Seattle for women prisoners, Alberta (Candace Bergen) sells retail but is on the hunt for a wealthy man, reminiscent of Marilyn Monroe in Gentlemen Prefer Blondes. Only Alberta realizes the Alice has drawn extensively on her friends’ lives for her earlier book, curiously titled You Always/You Never, and that Alice’s invitation to accompany her on the crossing (she can’t fly) is probably to help inform the sequel. A subplot pits Alice against the popular, pulp novelist also on board and causing a stir. Scriptwriter Deborah Eisenberg did craft some dialogue, guiding the actors to embrace certain personality traits. But the film belongs to this accomplished trio of actors who wander about the gorgeously photographed, confining ship, other guests oblivious to the acting royalty in their midst.

Most importantly, as the title Let Them All Talk announces, this is a film about talking—and listening. Here and in every life, each person reveals volumes about their perspective on the world and on relationships at times explicitly but, as often, through subtext revealing values implicitly embedded in comments. As significantly, some characters listen well, others remain focused on their own agendas, waiting for validation. Therefore, as slim and superficial, perhaps even sophomoric, as these “conversations” are, they expose past, present, and probably future for each individual, and, moreover, if we’re paying attention, for every friend we have and for ourselves as well. And so, as often with Soderbergh, what comes across as lightweight entertainment harbors a deeply insightful awareness of human behavior. Let Them All Talk streams on HBO Max.