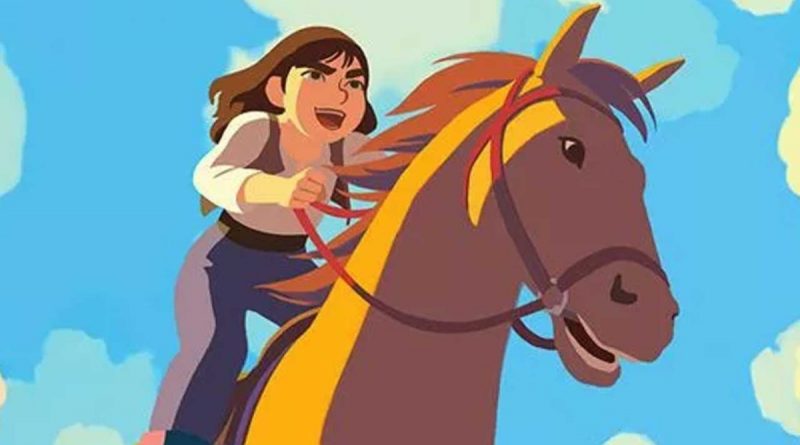 Rémi Chayé returned to the latest Annecy Festival, where his first full length feature Long Way North won the Audience Award in 2015, with the film Calamity, A Childhood of Martha Jane Cannary, where the film won the Cristal Best Feature Award, the fest’s highest honor. He had his hand in many aspects of this colorful and arty production, serving as director, co-writer, and art director. The story broadly imagines the pre-teen adventures of the girl who would grow up to be Calamity Jane, following her on her journey into the West, as she starts out on a wagon train with her father and siblings, gets herself into all sorts of trouble, and discovers herself and a few of her singular talents in the process.

The traditionally animated film was made through a French/Danish partnership, and was designed expressly for children, although adults can appreciate the beautiful color design. Chayé art directed the film, in collaboration with Colorist and Production Designer Patrice Suau, who took inspiration from ‘Les Nabis’ (Parisian artists that helped foster the transition from impressionism to abstract art full of symbolism) and the Fauvists, especially Gauguin, and the way he used color to describe light and space. As a consequence, the characters, often small against the vast landscapes, are lit from a sky bright with yellows, blues, and purples, and there’s a sense of geometry in the graphic design that expertly draws the eye to whatever central figure is meant to be the focus. So well integrated are the character and color design, the viewers will find themselves more connected to the story and visuals.

Calamity is not meant mirror the life of the ‘real’ Calamity Jane. Chayé and his co-screenwriters Sandra Tosello and Fabrice de Costil were not interested in sticking to history, because very little is known about Martha Jane Cannary, but rather chose to imagine how the girl that would become Calamity might choose to dress and live, largely as a man would in the American frontier of the 1860s. How might the real Calamity Jane navigate losing her parents at 11 years old, left to keep her siblings safe and fed? In her case she shattered gender norms, invented a life that would make her marketable, and do whatever she had to do to survive.

Chayé wanted to offer an alternative model for children for how to conduct themselves with bravery and stand by their choices that express their individuality, regardless of gender. Explained the writer/director, “Not all girls see themselves as little princesses, some don’t want to be placed in the little boxes expected of them by society. It is for them that I make this movie.”

In this story, Martha Jane often questions what makes her male or female, and why? At that time, just the desire to ride, rope, and steer a wagon was considered wrong for a girl, as was wearing pants or cutting your hair short. Through Martha Jane, this film asks ‘if I’m seen as a boy just for wearing pants, having short hair, and speaking my mind, what if I put on a dress? Does that alone make me a girl?’ In that way, it is right on time in terms of opening up the conversation about gender, identity, and the value or danger of needing societal permission to express individuality.

It’s worth noting that as director Chayé has made a long-term commitment to parity in his filmmaking, and one reflection of that is in Calamity’s score, composed by Florencia Di Concilio. Chayé had been actively attempting parity in his last production when he realized he had not come nearly close enough, he made a vow to himself to do better the next feature. For him, finding a female composer was essential, knowing the dismal percentage of women hired as composers for feature films. He had heard the music of Florencia Di Concilio used in the 2012 live action film Dark Blood, which employed a bluegrass-tinged score, and he decided that would be perfect Calamity. For it, Di Concillo mixes bluegrass and a full symphony orchestra to capture the west in all its ruggedness and grandeur.

This fresh, albeit liberal take on the early life of Calamity Jane is a charming offering for kids who struggle with leaning into their individuality, however traditionally unconventional that may be. That it will require kids who don’t speak French to read subtitles may be a bit of a stumbling block here in the US, (malheureusement), but those who take the plunge will enjoy it immensely.