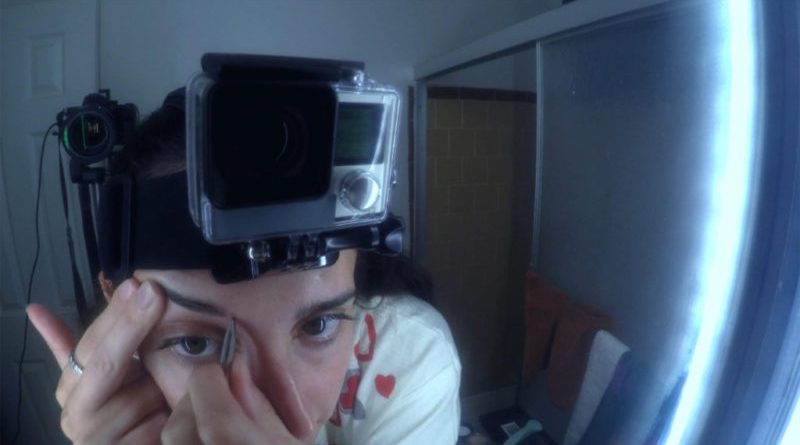 Documentary filmmaker Gillian Wallace Horvat carved out a career with shorts about classics such as High Noon and The Bells of St. Mary’s, as well as Hollywood legends such as Milos Forman, Frank Capra, Cary Grant, Orson Welles, and Maureen O’Hara. Her new satirical mockumentary I Blame Society attempts to uncork her rage at producers who mispronounce “intersectionality,” call her a “nice girl,” and offer women so-called opportunities by filming their buddies’ scripts.

But while Horvat crafts an effective portrait of a narcissist, I Blame Society’s lack of focus and awkward pacing make it a misfire. It’s the equivalent of whirling around with a machete instead of slicing with a scalpel.

When friends comment that she would make a good killer because of her attention to detail, the onscreen Horvat takes it as a compliment. (Her mother, who appears briefly, laughingly thinks otherwise.) The writer-director tells her friend Chase (co-writer and associate producer Chase Williamson) about her next project: filming how she’d hypothetically kill his girlfriend, whom she despises. A shocked Williamson looks to the camera for a lifeline as Horvat sobs over ruining their friendship.

Three years later, Horvat has a script that can’t get traction because of an unlikable female protagonist. She decides to rekindle her “murder project” instead of wasting her footage, although she notes that she could go to law school instead. Meanwhile, her boyfriend (Keith Poulson) finds this unhealthy and argues that no film is worth hurting someone or destroying herself. “If it’s a bad person … and if you get a good movie out of it…” she counters.

I Blame Society takes a while to find its footing as Horvat pursues what she calls “the whole murderer’s arc.” But her scattershot approach – killing a random woman she thinks is an actress, a homeless man, and assorted others – results in a muddled message. There are glimmers of what I Blame Society could have been as Horvat becomes surprised by her skills and annoyed when police presume the killer is a man. She certainly creates an unrepentant character out on a limb, but with a grab bag of victims in her wake, few viewers will want to follow her out there.