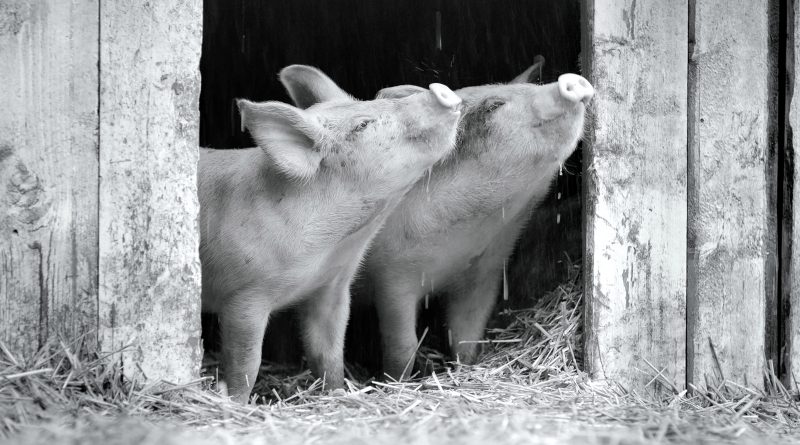 To quote that great sage of cinematic criticism, Abraham Lincoln, “People who like this sort of thing will find this the sort of thing they like.”

Honest Abe was commenting on a book, of course. But his assessment applies equally well to Gunda.

Victor Kossakovsky’s wordless, black-and-white documentary offers an up-close-and-personal view of farm life — from the perspective of its four-, two- and (in one case) one-legged creatures.

Gunda opens on a barn doorway. Just inside, there’s a large pig lying on its side, seemingly in some sort of pain.

The picture becomes clearer as a tiny piglet emerges; plainly, this is a sow who’s just given birth to a dozen or so squirming, squealing (and ravenous) babies. They’re undeniably adorable.

As mama searches for the runt of the litter, somewhere under mounds of hay, you may be tempted to say “Awwww.” That is, until the parent plants a hoof atop her newborn offspring.

It’s a signal not to expect any endearing anthropomorphism. From the Three Little Pigs to Babe, movies have endowed porcine protagonists with distinctive personalities. Gunda’s pigs may display definite behavior patterns, but there’s nothing human about them.

On the soundtrack, we hear the random chirping of birds — including an unmistakable cuckoo — and the rustling of trees.

A hearty “cock-a-doodle doo!” signals a brief sidetrack to some chickens — one of whom is one-legged and hops about with impressive agility.

Eventually, a bovine chorus of “moos” means another shift in perspective to a herd of resident cows.

For the most part, however, Gunda sticks with its pig’s-eye view of the world as mother and piglets root and roam.

Kossakovsky’s camera stays low and close, delivering undeniably striking shots. As one of the chickens delicately prowls the barnyard, for example, its giant, clawlike foot resembles nothing so much as a Jurassic Park dinosaur stalking human prey.

Speaking of humans, they’re nowhere to be seen throughout Gunda.

But the human presence is ominously unavoidable — especially when a rumbling piece of farm machinery appears. (For me, it triggered memories of Bambi’s “man is in the forest” jolts.)

Some viewers may find Gunda a fascinating example of “pure cinema” — and a chilling consideration of how humans exploit other living creatures.

Others — like me — might acknowledge the documentary’s technical achievements without being able to overlook the repetitive, one-note tedium of it all.