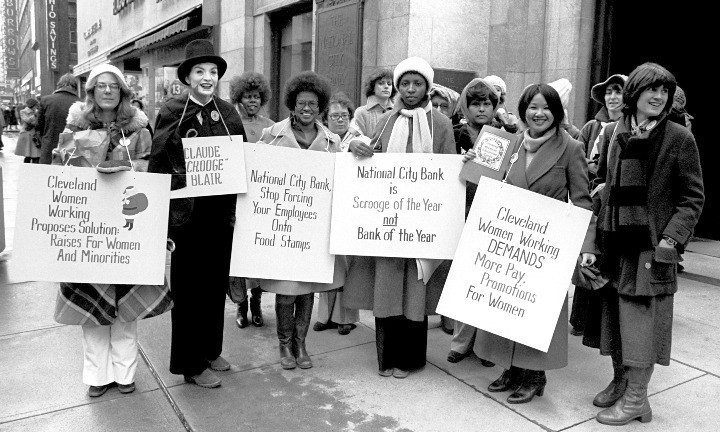 The 1980 workplace comedy 9 to 5 cast Dolly Parton, Jane Fonda, and Lily Tomlin as secretaries wanting revenge against their sexist boss. But as the documentary 9to5: The Story of A Movement shows, their onscreen hijinks were just a taste of the real challenges and frustrations that 1970s clerical workers faced.

Directors Steven Bognar and Julia Reichert, who previously teamed on the Oscar-winning documentary American Factory, shine a spotlight on the real-life funny and feisty women who took to the streets to demand better pay, benefits, and respect on the job. As 9to5 co-founder Karen Nussbaum says, “We changed the debate about whether women were real workers … and should have aspirations to lead in the workforce.”

Nussbaum started the labor movement with college friend Ellen Cassedy while the two worked in Boston offices. Although advertisements pitched clerical work as “important to women,” with a beleaguered typist even doing “finger gymnastics,” the public’s impression of a laborer at the time was a man in a hardhat. “There were 20 million office workers, and we didn’t exist,” Nussbaum says.

The movement grew from gatherings where Nussbaum, Cassedy, and their peers shared gripes about vague job descriptions, low pay, no promotions, and sexual and racial discrimination. An acquaintance of Nussbaum, Fonda recalls how the comedic film drew inspiration from these women’s stories. But as one 9to5 organizer says, the slapstick setup of an amorous boss chasing his secretary around a desk was really no joke.

The novice organizers first handed out newsletters and leaflets, picketing like Civil Rights and antiwar activists. Later, they learned about the law to pursue raises and better treatment through the Equal Employment Opportunity Commission. The documentary is liveliest when it recalls their creativity in highlighting outrageous behavior, such as delivering a “worst boss award” in front of the press to a man who demanded that his assistant sew a hole in the crotch of his pants while he wore them.

The film curiously skips over the fight for and defeat of the Equal Rights Amendment even as it notes how these women heard a fair amount of “I’m not a feminist, but …” from supporters. It also could have spent more time with women of color, although it acknowledges that some members did not welcome suggestions from organizers such as Atlanta’s Verna Barksdale, who is Black, about how to include women of different races.

Nevertheless, Fonda’s admiration – and the women’s own – for what the group accomplished is genuine. As one says, “It was like being bit by a bug. … I want to have a voice. I want to have more power.”