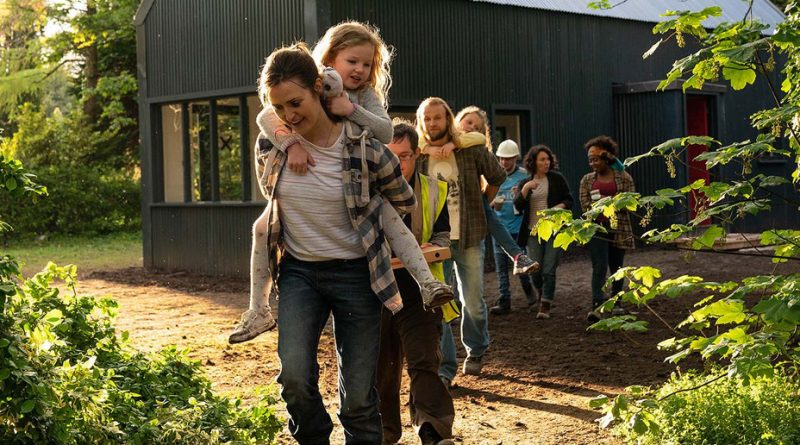 It’s a good thing Phyllida Lloyd felt it was high time to helm a small indie film. She’d already broken all box office records with the feature film version of Mamma Mia, only to subsequently direct The Iron Lady, which garnered yet another much deserved Best Actress Oscar for Meryl Streep. Lloyd had been directing for theater and opera for years, famously offering a trilogy of Shakespeare plays with an all-female cast. Part of that cast included Clare Dunne and Harriet Walter, the first a little-known but extremely talented actress from Dublin, the other, one of the most acclaimed and awarded performers in Britain. When Dunne penned a screenplay about a woman breaking the cycle of abuse and rebuilding her life through building her own house, she sent it to Lloyd for feedback. Lloyd called her and told her she wanted to make it into a film, and, boom, Herself had its biggest champion. Using the clout she’d gained through her former successes onscreen, Lloyd demanded that Clare Dunne play the lead character, single mother Sandra.

Sandra escapes a nearly fatal beating by her abusive partner, taking her two small daughters to temporary accommodations that are cramped and far from her work as a cleaning lady for Peggy (Harriet Walter), a medical doctor convalescing from an injury. Exhausted and frustrated by the endless waiting list for affordable housing, Sandra gets inspired to build her own home. After being offered land on which to build it by Peggy, she sets about creating a home and finds help to do so with a building contractor (Conleth Hill), and friends that selflessly come to her aid.

If it sounds like a metaphor for rebuilding your life, you’ve hit the nail right on the head, as it were. Dunne, co-writer Malcolm Campbell, and Lloyd find many small ways to show her progress, as well as her little successes and failures along the way. It is a beautiful story about finding yourself again, even through fear, and about the power of community and collaboration. While Lloyd pulls all the aspects of filmmaking, like the production design, art direction, and editing together masterfully, it is Dunne as the lead that makes this film so simply transformative. There seems no separation between Dunne and Sandra. There are no moments where she isn’t fully immersed in the character, so much so that it feels like the audience is always just watching moments of reality, whether those moments are of terror, when she is being knocked across the room by her partner, or of joy, when she dances with her daughters, or feels the comfort and support of her new friends. It isn’t a performance that will likely mean any major awards, because Dunne is too subtle and too much in Sandra’s skin to be appreciated by voters seeking flamboyance. Hopefully, she’ll be noticed enough to build a name recognized both inside and outside of Hollywood.