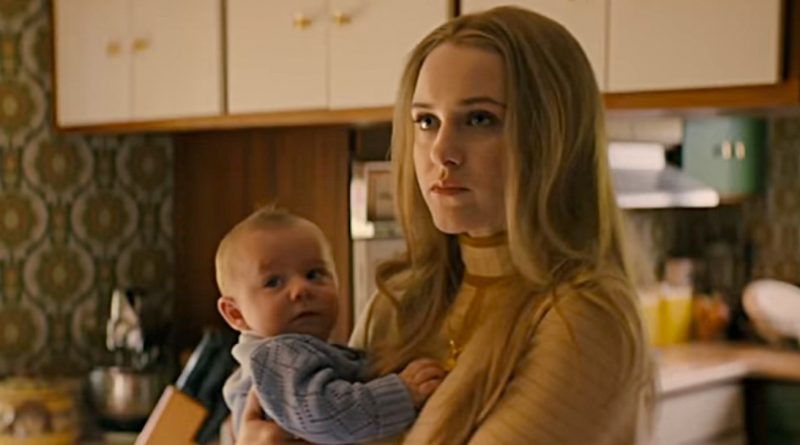 After firmly establishing herself as The Marvelous Mrs. Maisel, Emmy-winner Rachel Brosnahan goes for a total change-of-pace in Julia Hart’s neo-noir crime thriller about a woman struggling to survive.

Brosnahan plays Jean, a sheltered suburban housewife whose husband Eddie (Bill Heck) surprises her with a baby. Unable to have children of their own, Eddie ‘acquires’ one, and Jean knows enough about her thieving husband not to ask too many questions.

Problem is: after Eddie screws up a robbery and disappears, his ‘associate’ Cal (British-Nigerian actor Arinze Kene) shows up with a tote bag of cash, telling Jean they must leave her spacious house and go on the run with the crying infant, whom she’s named Harry.

“I’ve never been on my own,” she naively explains to Cal, as they flee from vengeful gangsters.

Striving for some sense of independence, Jean’s road trip as a fugitive includes an interlude in a remote cabin where she learns how to hold and shoot a gun, a skill that will later subsequently come into play.

That’s where she meets and intricately bonds with savvy Teri (Marsha Stephanie Blake), her son Paul (Da’Mauri Parks), and Cal’s father Art (Frankie Faison). who have already forged a connection with her missing husband Eddie.

“I’m so sick of everyone telling me what to do,” once-helpless Jean eventually decides, ready to muster the strength to reclaim her own life, heeding Cal’s advice: “Don’t look back…”

While striving for ‘70s authenticity, writer/director Julia Hart’s compelling female-centric character-study, co-written with her husband Jordan Horowitz, is filled with loopholes. Like how does Jean acquire so many changes of clothes since she didn’t have time to pack a suitcase? And why is a pivotal character inexplicably killed off-screen?

On the Granger Gauge of 1 to 10, I’m Your Woman is a subtle, surprisingly unpredictable 6, streaming on Amazon Prime.