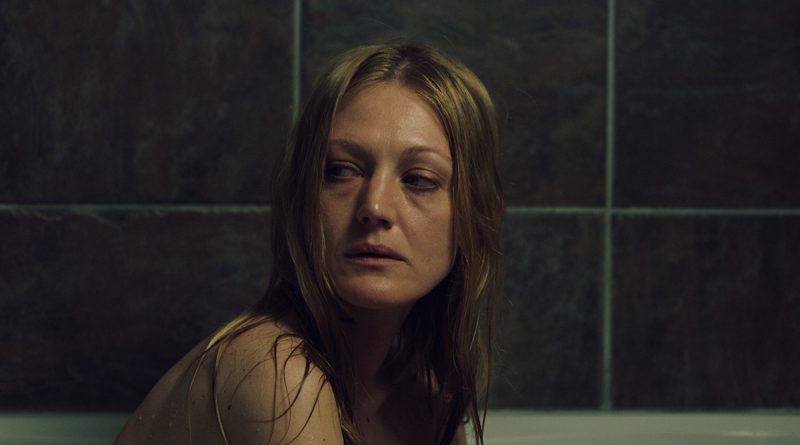 School teacher Holly, (Azura Skye), has been going through the motions at her job, and in her marriage to Rob, (Bryce Pinkham), a grocery store manager. She takes meds to cope from her depression, and seems to live her life in a perpetual vacuum.

The lack of emotional support from her husband and children causes tension in the home, and adds to her growing lack of self worth.

Holly tries to be there for the kids, but can’t seem to focus on anything except the lack of love she yearns for from Rob. Her son Ben, (Taen Phillips), feels her detachment and harshly yells at her for not having one of his shirts clean for a sporting event at school.

Falling right behind is Ben’s younger brother Lee, (Liam Seib), who screams at his mother and constantly throws temper tantrums.

Meanwhile, at school, Holly tries her best to keep the students in her classroom busy. Paul, one of the boys in her class, gets reprimanded for drawing instead of paying attention to her lecture. When class is dismissed, Holly takes a look at Paul’s drawing and is shocked to see sexy images of herself scantily clad. She immediately sends him to the Principal’s office and locks the drawing away.

One afternoon Holly goes to the grocery store to see her husband Rob, and catches him kissing another employee. Rob tries to defend himself, but Holly, overcome by his betrayal, just turns around and leaves. Paul, Holly’s student who works at the store as a cashier, sees how upset she is, and follows her out to her car. He is startled when she grabs him close, and has sex with him. He tells her how beautiful he thinks she is and that her husband doesn’t deserve her.
Back at the house Holly busies herself with cooking dinner and has an irrational fit when a mouse comes out of the cabinet and scares her. She is slowly spiraling out of control and this just contributes to her impending breakdown.
After an ensuing argument at a family gathering about who makes a better apple pie, Holly, left feeling inadequate about her cooking skills, abruptly leaves.

Emotionally overwrought, she returns home and stumbles around looking for a gun. She then heads back to the grocery store to finally confront Rob and express all of her pent up rage.

Writer/director Dean Kapsalis’ first feature is a dark emotional roller coaster ride and may be unsettling to some.