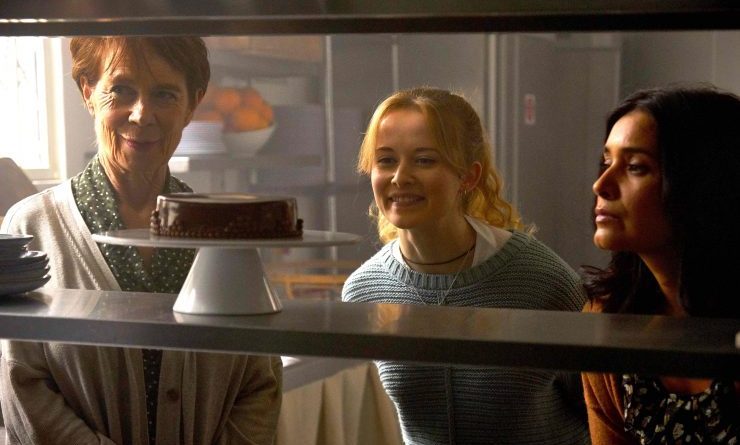 A perfect escapist film to look for is director Eliza Schroeder’s Love Sarah, set in the “cosmopolitan collective” of London dealing with the heaviest life happenstance, sweetened and softened with a confectionary glazing.

Death comes for us all, but when it comes far too soon or in Sarah’s case, rather inconveniently, what then? Sarah’s untimely death creates a ripple effect of grief and financial loose ends that her friends and family are trying to process.

Our titular Sarah (Candice Brown) was a daughter, mother, and notable chef about to embark on a new bakery business venture. The future looked bright. As life throws its curve balls, we learn early on that Sarah has tragically passed away following a cycling accident.

This leaves her estranged mother, Mimi (Celia Imrie) aimless daughter, Clarissa (Shannon Tarbet) and closest friend and business partner, Isabella (Shelley Conn) to come to terms with her death, something they do collectively by opening a new bakery. The route to this business venture features these three women— all marvelously depicted characters—working together to open Sarah’s planned venture in a thriving, diverse London setting.

The twist is the determination of daughter Clarissa’s paternity in the character of the ringer chef, Matthew (Rupert Penry-Jones), who comes into play in a bit of a messy romantic overlap. Another delightful turn of event for Imrie’s Mimi is the blossoming of a lovely romance with Felix (Bill Paterson). Paterson is a recognizable Scottish actor who nails it in any role—large or small—he is cast in.

Our film is anchored by the three women and the female-centric survival and reinvention arc, with new adventures and work elevating the three women from a state of despair to rolled up sleeves action. Mostly, Love Sarah is a sweet story about punching up and out of the grief that family and friends were not prepared for. This unexpected death of someone whose ambitions were set to chart a new course in life for more than just the deceased turned out to be their salvation in the end.

Schroeder’s story becomes a pas de deux between the late Sarah’s daughter Clarissa and her mother Mimi who are struggling to forge a path together despite their contentious history. Isabella becomes a de facto daughter to Mimi, and is paELLYrt of the process of reigniting Mimi’s zest for life by honoring Sarah’s dream and helping to make it a reality.

We delight in seeing Mimi, riddled with regrets about the loose ends between her and Sarah, drawn back into living her life, as Sarah’s best friend and daughter are fighting to open the bakery that Sarah was to helm. A go-getter to the core, Mimi, like her late daughter, is naturally curious and will see Sarah’s vision realized. In doing so she creates a passion project and reason to live for herself, healing familial rifts and connecting far-flung cultures how living in London and their hankered-for baked goods in her clever brainstorming moment.

Imrie steals the show in this intergenerational snapshot of coping with a sudden loss. She also stars in FX’s Better Things as Pamela Adlon’s mother Phyl. The film is Mimi’s step-by-step journey back to living and surviving a happenstance that no parent wants to face.

Well worth your time, Love Sarah examines the grief void and how to pull someone back into living after they lose someone and are deeply grieving. How do we talk to people in a meaningful way who have lost someone close? How long before we venture out into our routines again to get on with it and live our lives when we lose someone? All heavy questions that may cross your mind when watching this life-affirming and comedy-tinged drama.