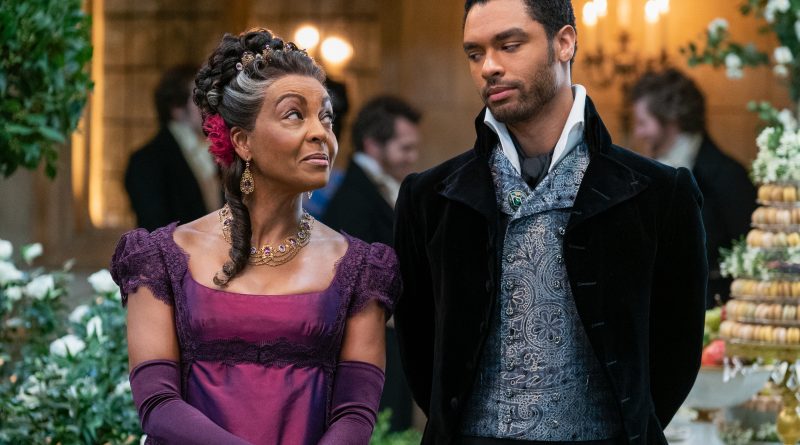 “We were two separate societies, divided by color, until King George III fell in love with one of us,” Lady Danbury (Adjoa Andoh) explains to her brooding protégé, Simon Basset, the Duke of Hastings (Rege-Jean Page). “Look at everything it’s doing for us, allowing us to become. Love, your Grace, conquers all.”

Based on the first of Julia Quinn’s bodice-ripping, romance novels, the inaugural season, set in 1813, revolves around naive Daphne Bridgerton (Phoebe Dynevor), embarking as a London debutante in the competitive marriage market.

Dubbed “flawless” by crafty Queen Charlotte (Golda Rosheuvel), Daphne piques the interest of several suitors, all of whom are rejected as “unworthy” by her older brother Viscount Anthony (Jonathan Bailey), titular head of Bridgerton family after his father’s death.

Meanwhile, the not-so-prosperous Featherington family is also in an uproar. A distant cousin, Marina Thompson (Ruby Berker), arrives; she’s pregnant and the father is fighting in Spain. Can the Featheringtons marry her off before scandal erupts?

While Daphne’s successful entrance to London society is duly noted by anonymous gossip columnist Lady Whistledown (voiced by Julie Andrews), the eligible Duke of Hastings is being also being pressured to find a wife. After vowing never to wed, will he court Daphne? Or will she fall for a Prussian Prince (Freddie Stroma)?

Produced by Shonda Rhimes (Grey’s Anatomy, Scandal), it’s fun, frothy escapism. According to showrunner Chris Van Dusen, regarding that era’s excess, beauty and decadence: “It was over-the-top: the costumes, the jewels, the glittering ballrooms, the country homes.”

On the Granger Gauge, “Bridgerton” is a tantalizing 10 – with season 2 expected sometime in 2022.