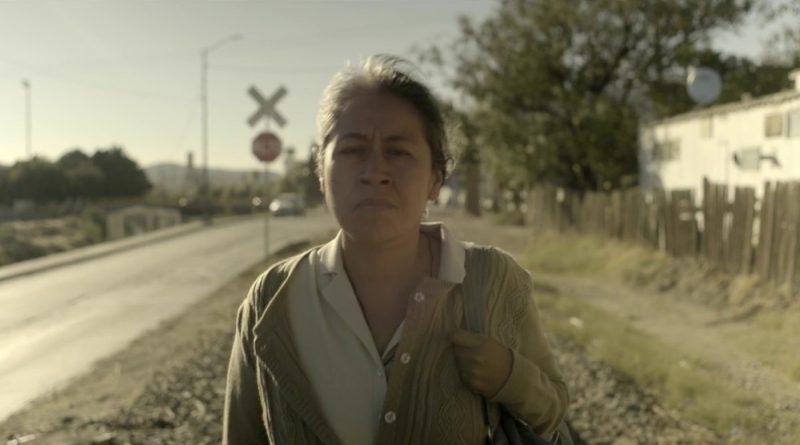 With Identifying Features, first-time director Fernanda Valadez valiantly avoids the usual drug-wars action thriller. Instead, she has delivered a harrowing drama about the migration crisis at the U.S. southern border that is far more intimate and poignant as it focuses the lives of people looking for a better life and the danger involved in doing so.

Filmed in rural Guanajuato, Mexico, the film is packed with widescreen images that heightens this saga of a middle-aged mother Magdalena (Mercedes Hernandez) who is determined to find out whether her son, who left to find a job in the states, is still alive. When his friend and traveling companion turns up in a photo book of bodies found on the bus, his mother transforms into a determined and methodical detective as she is collects helpful information along the way, from a nurse whose son was kidnapped four years ago to a woman at a migrant shelter who knows of a recluse who was injured on the raid of the bus and might have some info on her son.

She is also lucky to come across Miguel (David Illescas), a young man who has been deported after living in the states for five years. He goes back home to reunite with his own mother only to learn that most residents of the town are gone while militias roam about. The pair bond together as they help one another filling in for their missing loved ones.

While Valadez gets by with minimal dialogue, she makes hay with Mother Nature’s natural vistas with rolling hills, a placid lake, fields and dirt roads. She may be a little too keen on blurred images and sun flares to build tension while jittery electronic sounds fill the soundtrack. But she knows well enough to focus on the faces of her actors and allow us to invest in their journey. At times, the story wanders and the script doesn’t fill in all the blanks – including the sight of a mythic creature called El Diablo, who sports horns and a tail. While viewers might be left wanting more of an explanation of the events, there no question that Valadez is a talent to watch.

EDITOR’S NOTE:Identifying Features is AWFJ’s Movie of the Week for January 22, 2021