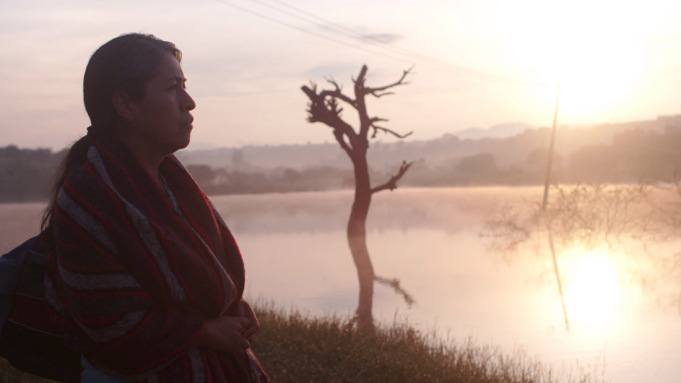 Heartbreaking and quietly powerful, writer/director Fernanda Valadez’ debut drama Identifying Features shines a light on the complex, tragic realities of what can happen when undocumented immigrants set out to cross the border from Mexico into the United States. It is a truly heartbreaking film that puts a very human face on a humanitarian crisis, sparking both empathy and outrage. 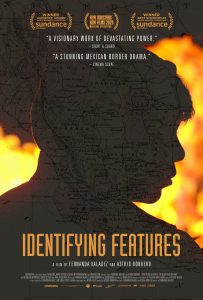 The film centers on Magdalena (the excellent Mercedes Hernández), whose teenage son left home to venture to the U.S. in search of a good job and a better life but hasn’t been heard from in weeks. So she sets out to find answers, a journey that leads her first to bureaucrats who try to convince her that her son is dead — the victim of the violent cartels, who prey on migrants and leave their victims in mass graves. But her motherly instincts (and the advice of another mother she meets) send her in search of a man who may know more about what really happened to her boy.

Along the way, Magdalena meets Miguel (David Illescas), a young Mexican man who had crossed into the United States five years earlier and has now been deported back to his home country. He’s en route to his own mother’s house when he crosses paths with Magdalena; they end up accompanying each other through seemingly empty but still dangerous rural terrain. It would spoil the film’s most affecting story twists to say more about where fate takes them from there.

Identifying Features is often difficult to watch; just as in life, there are no easy answers here, and the ending is a kick in the gut. But there are moments of delicate peace and beauty, however fleeting, and Valadez captures them beautifully: a drop of water gleaming on a branch, the sun shining its golden light on a deserted road. And she elicits strong, convincing performances from her stars — Hernández and Illescas say as much with their eyes as they do with their mouths. The power of their story is in both its specificity and its generality: They bring their characters to vivid life, but what happens to Miguel and Magdalena could happen — and has happened — to so many people. And that is truly a tragedy. — Betsy Bozdech

Sandie Angulo Chen: Identifying Features is Fernanda Valadez’s unforgettably powerful directorial debut. Valadez — who also co-wrote the script with Astrid Rondero — centers the story around Magdalena (Mercedes Hernández), a middle-aged mother who’s desperate to find out if her teen son Jesus has died while attempting to cross the border from Mexico to the U.S. Jesus’ best friend and traveling companion’s body was found, photographed, and shown to Magdalena, but not his — so she gathers her strength and meager savings to travel from her town in Central Mexico toward a bordertown. Her Odyssean quest for the truth is painful, at times heartbreakingly so, but worth the viewing. The most impactful aspects of the film involve her crossing paths with a young man who was just deported back to Mexico from the States. He discovers his rural home is empty, and his small village is overrun with menacing armed men. Valadez doesn’t always provide short-hand for English-speaking audiences (even Spanish speakers are kept in the dark during an elderly witness’ story, told in his indigenous dialect). The motives of menacing armed men aren’t clear — are they a militia, narcoterrorists, a combination of the two? It doesn’t matter, because this is Magdalena’s story, and it’s told with a poignancy and immediacy that will stay with you long after the credits.

MaryAnn Johanson This is a devastating film, weeping with grief and devastated anguish. I don’t think most of us who live in relative comfort can truly appreciate what it means to have to risk everything to get to a place where, if we’re lucky, we might be able to work our asses off for minimum wage, and count ourselves fortunate to have have risen to such a station. But to see a loved one go off in search of such a small, hard life and then not even know if they made it? Brutal. We should be ashamed that this is the state that way too many of our fellow human beings find themselves in.

Susan Wloszczyna: With Identifying Features, first-time director Fernanda Valadez valiantly avoids the usual drug-wars action thriller. Instead, she has delivered a harrowing drama about the migration crisis at the U.S. southern border that is far more intimate and poignant as it focuses the lives of people looking for a better life and the danger involved in doing so. Read full review.

Leslie Combemale Identifying Features, directed and co-written by Fernanda Valadez, follows Magdalena Mercedes Hernandez, a desperate mother in search of her missing son, through the Mexican landscape bordering the United States, and reveals the dangers of simply existing in that part of the world. Whether it be be danger from doing the bidding of drug cartels, or from armed men in league with the police, the risk to life is immediate and ever-present. It isn’t made clear by the filmmakers who exactly is doing the killing here, which fits the story they’re telling, and makes sense. To a mother looking for her child, it doesn’t matter. Hernandez has a stoic determination that demands that the audience stick with her character through this excruciating journey. There is a metaphor, we discover, in the name of the film. It is so much worse than the title suggests, which is a reference to how people recognize the remains of their loved ones. It connects the characters and the audience to the loss of self identity, country and safety, that is pervasive in the film.

Jennifer Merin Identifying Features is Mexican filmmaker Fernanda Valadez’s devastating drama about a devoted mother who is trying to find her son who left their home in Guanajuato to find a better life in El Norte — the United States — and disappeared. The screenplay, co-authored by Valadez and Astrid Rondero, relies on imagery as much as dialogue for exposition, and the conceit works perfectly to communicate the anguish of circumstances. Mercedes Hernandez’s performance as Magdalena, the woman in search of her missing son, is brilliantly underplayed in a way that makes you feel rather than observe her anguish. This is not an easy film to watch, but it is one that really must be seen because it so poiniantly points to an ongoing issue that is, as it exists in real life, persistently under-addressed. Identifying Features is the winner of the 2020 Gotham Award for Best International Film and the Audience Award and Best Screenplay prize at Sundance Film Festival.

Loren King Fernanda Valadez’s stunning feature directorial debut Identifying Features is the most captivating and harrowing film about Mexican border violence and injustice that I have seen in some time, except for the recent documentary Blood on the Wall. But Valadez’s film stands out because of its lean, haunting story (written by Valadez and Astrid Rondero) and visuals that are alternately beautiful and terrifying; it’s at once a pastoral film and horror movie. In a performance rooted in neorealist tradition, Mercedes Hernández is quietly commanding and completely natural as Magdalena, a weary, middle aged mother. She leaves her home in rural Mexico to search for her son, Jesus (Juan Jesús Varela), missing since leaving for the border with a friend who has since turned up dead. Magdalena’s desperate search to find out whether Jesus is alive is both horror story and human drama; and a tense investigation into what routinely happens to Mexicans trying to get to the US border to find work. We follow Magdalena as she doggedly crosses barren fields and sunlit rivers and as her search turns from frustrating to promising to terrifying. This sparse, unsentimental film unfolds slowly, deliberately into a visceral gut-punch, showing what’s at stake for poor, rural Mexicans whose land has been overtaken by lawless, marauding drug cartels. The cumulative impact is stunning and heart-wrenching.

Kathia Woods Immigration is a complex issue, but one of the aspects that we don’t discuss in this alleged caravan of people are those who go missing, are robbed, kidnapped, or killed before even reaching the border. Identifying Features centers on mothers looking for answers about their missing children. Starring Mexico’s acclaimed actress Mercedes Hernández as Magdalena and Laura Elena Ibarra as Chuya, two women who are filled with worry after not hearing from their teenage sons. It has been two months since they embarked on the journey to the US to find work. Sadly, one of the women’s sons is found dead, leaving the other woman fraught with worry. Fernanda Valadez’s Identifying Features is a love letter to mothers and to those who are looking for the elusive American Dream. People who are willing to cross the desert, fighting the elements, starvation and unscrupulous gangs, to make a minimum wage in ‘the north’ don’t make their decisions lightly. This film will give light to all those that paid the ultimate price for that elusive American dream.

Cate Marquis Identifying Features begins as a melancholy journey as a mother leaves her in rural Mexican home in search for her son who left with a friend intending to travel to the U.S. but then vanished. When authorities present evidence of the friend’s death, the mother rejects their conclusion that her son met the same fate and continues on an increasingly harrowing journey as she re-traces his steps. In a chilling tale filled with hauntingly beautiful photography, Mercedes Hernandez gives a heartbreaking performance as the mother, in director Fernanda Valadez’s award-winning, shocking expose of the problem of criminal gangs preying on travelers going to the North.