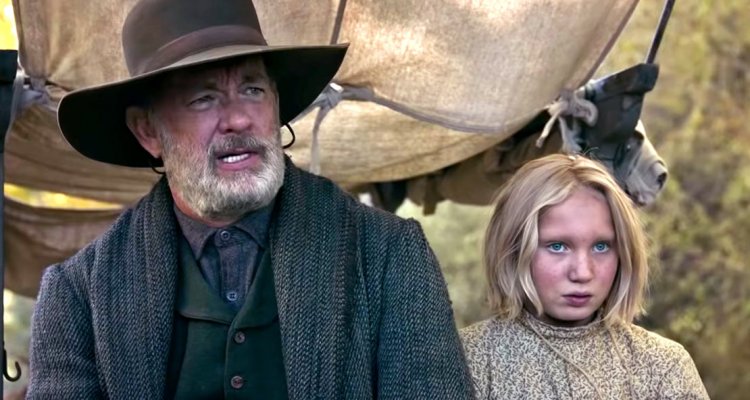 Set five years after the Civil War, Tom Hanks stars in this elegiac Western as Captain Jefferson Kyle Kidd, who travels from town-to-town, enthralling often-illiterate audiences with stories about what’s happening in this country and abroad, charging a dime per person.

It’s 1870 and the tumultuous 15th Amendment has just been ratified, extending the right to vote to all men without regard to race or previous condition of servitude.

While riding from Wichita Falls, this itinerant newsreader finds abandoned 10-year-old Johanna Leonberger (Helena Zengel), who was raised by the Kiowa Native American tribe after her farmer parents were killed. Determined to return her to members of her biological family, he soon discovers that she is far from welcome by her relatives in far-off Castroville.

“An orphan twice-over,” uncommunicative Joanna, who doesn’t speak English and never learned to use a knife-and-fork, suffers a kind of post-traumatic stress disorder, defiantly determined to run away to return to the familiarity of the Kiowa.

And Capt. Kidd is an archetypal lonely wanderer, fleeing from his own sad history of physical abuse and emotional trauma.

Soon, a surrogate father/daughter relationship develops, as they face various dangers along the rough-hewn road in Reconstruction-era Texas, including a brutal shoot-out with a trio of child-sex traders.

Leisurely directed by Paul Greengrass “Captain Phillips), who co-wrote the script with Luke Davies, it’s adapted from Paulette Jiles’ 2016 novel, which bears remarkable resemblance with Charles Portis’ True Grit and John Ford’s The Searchers. Both starred John Wayne as an older man on a journey with a young girl.

On the Granger Gauge of 1 to 10, News of the World is an episodic 8, a road movie, steaming on Netflix.