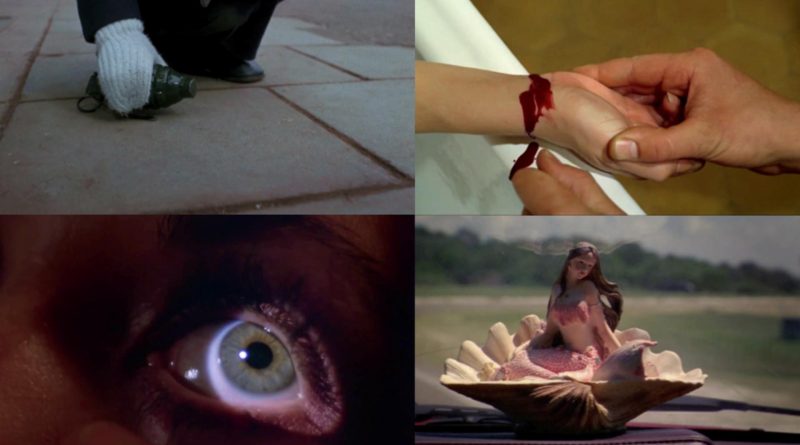 Immediately, with text on screen before any image appears in Just Don’t Think I’ll Scream, writer/director Frank Beauvais writes, “I watched over 400 films between April and October 2016. This footage comes from them.” This information in no way prepares viewers for the overwhelming onslaught of thousands of shots, a mere few seconds each, that follows for seventy-five minutes.

Guided through the remainder of this journey by Beauvais’ observations, his voice-over narration next reveals he is forty-five years old, has lived for six years in a tiny, picturesque Alsace village in the Northern Vosges national park, and seven months ago separated from his partner. In other words, dramatic, even traumatic, personal details will clarify the catalyst for Frank’s introspection, including attending his father’s death three years previously. But Beauvais expands his analytical commentary to include religion, political movements, terrorist attacks (the Pulse nightclub massacre in Florida, the Nice tragedy, among others), the deaths of notable artists (Prince, Michael Cimino, Abbas Kiarostami), democratic versus autocratic societies, and the “useful distraction” of sports, all interwoven with his impatience “to leave this daily life steeped in repetition and self-sufficient conditioning.”

Beauvais expresses a profound awareness of his own strengths and weaknesses, his anxiety attacks (perfectly described), himself as a “consenting captive of things,” his cinematic obsession, and his “fake confidence.” At times, quite poetically, he describes his internal and external world. The problem comes trying to keep up with his nonstop recitation as film clip after film clip flies by. In addition, for anyone not fluent in French, reading the subtitles distracts even more from valuable time to contemplate significant, worthy insights. Moreover, the film clips demand attention, but another replaces each before the relationship between words and images become obvious or challenging.

In press notes, Beauvais writes that “through a mashup” he hopes to “create a reflexive dynamic for the audience, to constantly play with the gap and correspondence between what they see and what they hear.” Viewers will have to embrace overpowering stimuli. For those who can, it’s quite a wild ride. In French with English subtitles, Just Don’t Think I’ll Scream is available on the KimStim website.