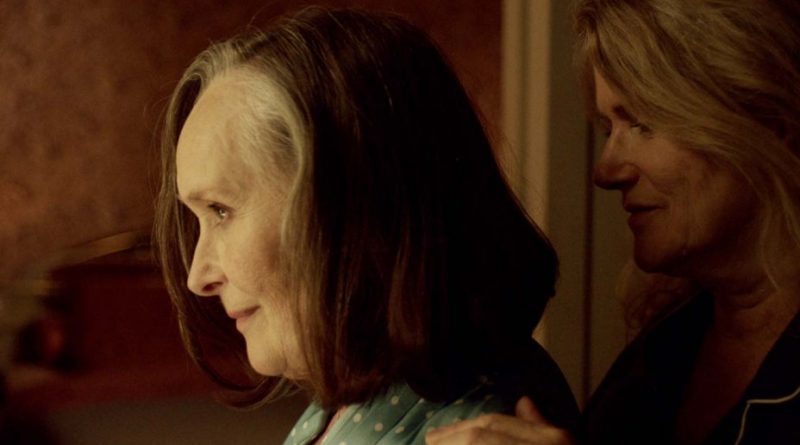 The French drama Two of Us showcases a scorching performance from the great Barbara Sukowa.

Sukowa has delivered so many memorable roles over the course of her career, starting with her work with legendary German director Rainer Werner Fassbinder and later in, among others, Rosa Luxemburg (1986) and Hannah Arendt (2012), both directed by Margarethe von Trotta. In Two of Us, Sukowa plays Nina Dorn, aging beautifully and naturally in a quiet Paris apartment building with her longtime lover Madeleine Girard, beautifully played by French actress Martine Chevallier, a veteran of the renowned Comédie-Française. Since Madeleine has kept their relationship secret from her grown children, Nina keeps her own barely furnished apartment across the hall, entering “Mado”’s warmly decorated home at will with her key.

From the opening scene, we are privy to their tender, decades-long romance. Nina and Mado plan to move to Rome, where they met. As the more open Nina makes plans and saves money, Mado tries but fails to break the news to daughter Anne (Lea Drucker) and son Frederic (Jérôme Varanfrain). Nina expresses her anger to Mado with harsh words before Mado suffers a stroke that renders her speechless and Nina heartbroken and filled with guilt.

Director Filippo Meneghetti effectively and elegantly uses silence, literal and metaphorical. Mado must watch helplessly with brimming eyes as Anne takes over her mother’s care and relegates Nina to mere neighbor, causally pushing her aside even though Nina longs to take care of Mado. Sukowa conveys a gamut of emotions without saying a word and often just through Nina’s eyes as she peers through the peephole of her door when Anne enters and exits Mado’s apartment.

Without melodrama, the film shows the emotional cost of hiding a loving relationship. Two of Us delivers a rare and restrained portrait of enduring love, especially between women of a certain age, right up to its devastatingly, moving final frame.