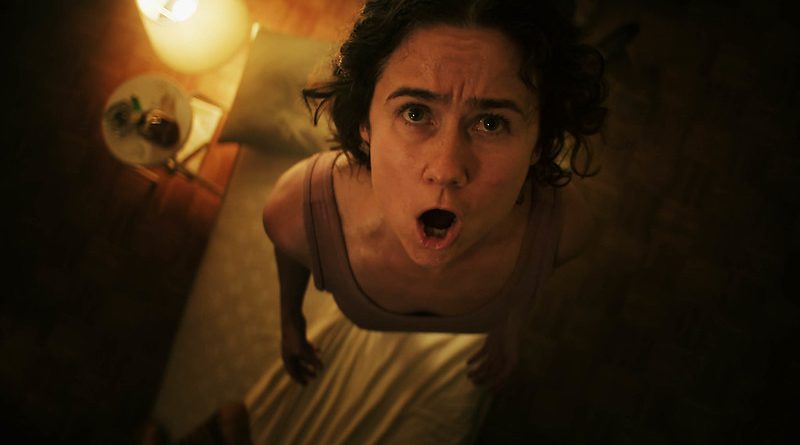 Frida Kempff’s Swedish thriller Knocking excels at building tension in its opening moments that it ultimately can’t sustain throughout the film’s 78-minute runtime.

Molly (Cecilia Milocco) has just been granted freedom from a mental institution with the chance to start her life over. Moving into a new high-rise complex just as a stifling heatwave descends on the city, Molly’s fresh start is met with trouble from day one.

A mysterious knocking can be heard from above her apartment, but to Molly’s frustration, she seems to be the only one who can hear it. Coupled with a growing red spot on the ceiling and the faint cries of a woman through the vents, Molly begins to question her newfound sanity as she dives deeper into paranoia.

Here, the everyday becomes horrifying for Molly in the film that unnerves through its use of tight close-ups and grating score, setting viewers on edge in a full sensory experience. A short film director, Knocking is Kempff’s feature-length debut and while she shows promise, it would seem as though the transition to even a scant 78-minute runtime is a stretch for a filmmaker used to doing more with less time. While visually intriguing, Knocking gets off to a strong start that it never manages to build upon.

The thriller takes the idea of a woman in a fragile post-traumatic mental state and couples it with gaslighting to drive its central narrative. Unfortunately, it’s a technique that has been better accomplished in recent horror movies like Midsommar and The Babadook.

Molly is a wild-eyed, middle aged woman who is precariously balanced between delusion and credibility. She’s treated as a hysterical lonely woman whose concerns are brushed aside by neighbours and police. Used to being dismissed, Molly is left to rely on her own devices and incoherent Sharpie scrawling on the wall to try to make sense of what she is experiencing. And while the bulk of the movie rests on Milocco’s capable shoulders, the film tries to pile on far too many unwarranted twists before ultimately coming together in a bizarre and fractured final act that fails to answer any of the film’s central questions.

Just like Molly, viewers are left with more questions than answers as the film reaches an unsatisfying conclusion in this 2021 Sundance Midnight selection.