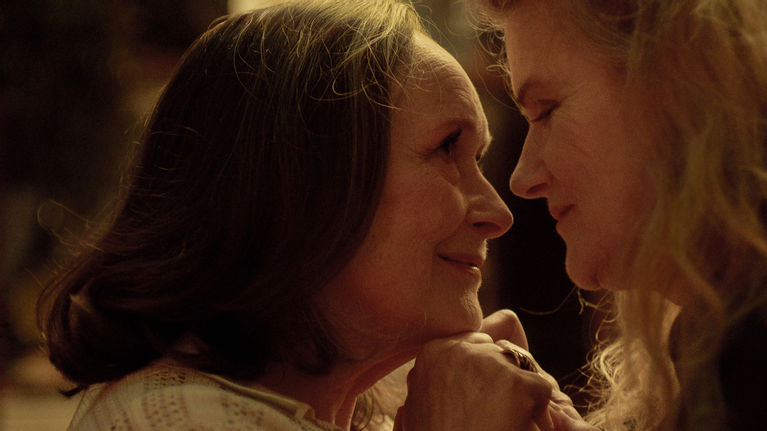 As first-time directors go, Filippo Meneghetti rarely takes a wrong emotional turn with Two of Us, a story of long-time female lovers living in a French town who are able to keep their relationship on the down-low given their living circumstances. The sweet-natured widow Madeline (Martine Chevallier), whose nickname is Mado, is able to hide the fact that she and the much more brazen and younger Nina (Barbara Sukowa) are a couple since they dwell in adjacent domiciles on the top floor of an apartment building.

Nina is determined to share what years they have left in Rome, with the hopes that Mado will sell her place so they can live in candid bliss. Unfortunately, Mado has a grown daughter and son who greatly care about her along with her much-adored young grandson.

Matters grow more complicated when Mado suffers a stroke. A creepy bug-eyed caregiver Muriel (Lea Drucker) is hired to tend to her needs around-the-clock but she is also suspicious of the Nina’s easy access to the apartment. Nina, much like Glenn Close in Fatal Attraction, is frantic about not being ignored as she bribes the caretaker to allow her to look after Mado, constantly peeps through the spy holes in her door and takes to using the key to Mado’s place at all hours. She even stoops to smashing a window and damaging a car in order to be with the love of her life.

While Sukowa’s Nina puts on an aggressive side show and rightfully knows that Mado needs her more than ever in the state she is in, Chevallier – who can’t speak — also makes an indelible impression. The partial invalid’s large blue eyes makes it clear she knows what is up and, more importantly what she needs. At first her family members are shocked by the revelation that Mado has been in a long-term lesbian relationship but eventually they put her wishes first.

We have seen more films over the years featuring older male lovers, including The Birdcage, Beginners, Love is Strange and the just-released Supernova. But Two of Us provides a strong counter-balance to those stories. If you aren’t moved by the final scene, you need to check your pulse.