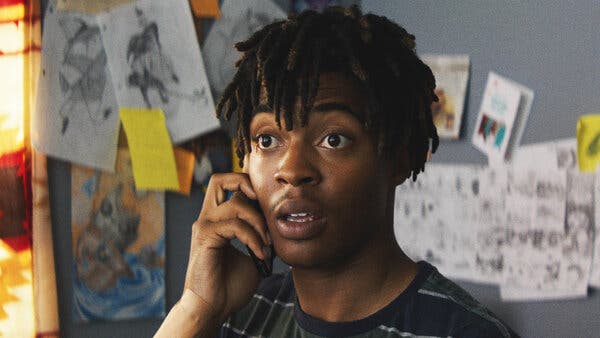 Crowd-pleasers are always de rigeuer the first day of Sundance, but as it trundles on, a daily load of 4 to 6 intense movies can take its toll. Therefore, in every Sundance schedule one needs a few palate cleansers from the heavy, albeit important documentaries, the Terence Malick-inspired, impressionistic indies, the dramas examining grief and so on. It behooves attendees to include a purely fun narrative whimsy that doesn’t bring tears. Enter producer/writer/directors Manuel Crosby and Darren Knapp’s wackadoodle coming-of-age thriller and comedic throwback First Date. The convoluted, frenetic, and very entertaining plot will lift you out of whatever existential ennui your life, the pandemic, or your life during the pandemic is causing, if only for the running time.

Shy teen Mike (Tyson Brown) has clearly had a crush on neighbor Kelsey (Shelby Duclos) for a while. You can tell by his awed expression as he watches the badass brunette boxing in her garage. He finds the courage to ask her out, but needs wheels, so he buys a 65 Chrysler on its last leg from a sketchy dude named Dennis. All he has to do is pick Kelsey up, but he can’t seem to get there. It has something to do with ‘Tony’ from the movie’s opening sequence, who gets shot dead while on the phone begging recent first date Tasha to run away to Mexico. Between Tony’s family, Dennis and his trigger-happy wife, the bumbling crew that killed Tony, and a duo of cops he keeps running into, Mike and eventually Kelsey become embroiled in a nightmare of drugs, theft, and murder. The whole story is nuts and goes a mile a minute. It clearly aspires to the funnier parts of Tarantino’s Pulp Fiction in both tone and language. Like Pulp Fiction, it also has a fairly big cast of characters that weave themselves together and apart, with meetings that are sometimes to their benefit, and sometimes to their end.

The cast and crew are almost entirely made up of talent from in and around Sacramento and Valley Springs, where First Date was shot on a shoestring budget. Crosby acted as cinematographer and co-editor, as well as contributing to the score. This is the first feature for leads Brown and Duclos, and both rise to the occasion, believably embodying two innocent high schoolers caught in the crossfire of a bunch of criminals.

A funny, frothy joy ride and with just enough blood and bite to satisfy, let’s hope First Date finds distribution with a streamer. A larger audience could benefit from a bit of escapism and distraction while waiting out the pandemic.