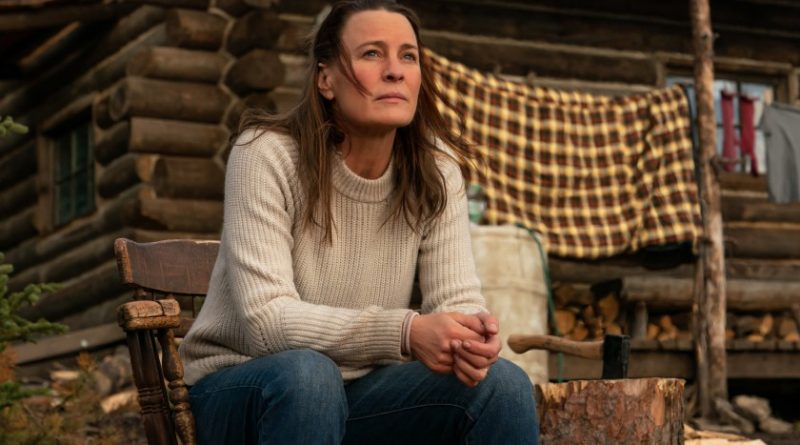 Mother Nature can be harsh, but she can also be healing. We see both sides of her in Robin Wright’s feature directorial debut Land. Wright also stars in the film as Edee, a woman running away to the remote wilderness as a means to escape her memories of a tragedy. Her success in escaping is more difficult than she imagined as she leaves everything and everyone far behind. Ditching her cell phone and car, she stocks a newly purchased and dilapidated cabin with no amenities. Her survival knowledge and instincts prove to be less than adequate as she finds herself freezing and starving after a bear ravages her cabin. But for the kindness of a random hunter passing by, Edee would have died…but she didn’t.

Land is a serenely quiet film which rages forward emotionally. Beautifully set in the mountains of the Pacific Northwest, Edee is surrounded by the lush green trees enveloping her like a comforting hug. Her cabin, set in the middle of hundreds of forested acres, the nearest town miles away, perches above a river teeming with life. Her daily focus of eating, drinking, and staying warm occupy her thoughts, disallowing her mind to wander too frequently back to the life and tragic moment she left behind.

Writers Jesse Chatham and Erin Dignam are careful in allowing the viewer to only get small glimpses into Edee’s tragic past. We know just enough to bait us into yearning to learn more. Edee’s sister Emma is concerned that she will harm herself. Edee can’t move forward to heal so she moves away. Longing for solitude so as not to encumber others with her emotional burden, Edee’s new environment seems a perfect fit. Just as she seems to find a comforting routine, winter’s formidable force arrives and the simple task of using the outhouse coincides with a hungry bear who destroys her well-intentioned home in matter of mere moments. The setback is more than Edee can endure as the intensity of her screams of “I can’t do this!” rings in your head. Her every move makes you question yourself and how you would handle the situation. Near death, she is discovered by Miguel (Damien Bicher) who not only finds her, but saves her on multiple levels. Their intermittent friendship evolves over the course of more than a year as he teaches her survival skills of hunting, trapping, and fishing. The lives they’ve lived in many ways are parallel, and with an unexpectedly perfect ending, Edee emerges like a caterpillar from a cocoon.

Land is an empathic journey of one woman who, with the compassionate understanding of one man and nature’s healing hand, finds the strength to live life again. Like Mother Nature, life isn’t fair and we all are dealt a different hand. Edee’s tragic life, unfortunately, isn’t unique but her honesty with herself about the situation is rare. And reaching out to and connecting with the land gives Edee a newfound sense of love with meaning.

Wright takes on the difficult task of both director and star, but she must carry the film as Bichir’s character, while pivotal, is minor in screen time. Wright effortlessly shoulders the burden, bringing us into her situation, and allowing us to walk in her shoes. It’s a subtle and nuanced performance requiring deft skills both in front of and behind the camera, and immediately, we are connected to this character and her roller coaster fight for life and survival. While much of the film is a solo performance, her actions, while frequently quiet or small, speak volumes as it doles out the emotional honesty of pain and recovery.

Equally important is the ability to capture the environment with its beauty, power, and unforgiving force. Wright’s eye, again, sharply brings us into Edee’s world in the Pacific Northwest as we gaze upon the seemingly endless mountain ranges in the distance and then narrowly focusing upon the intricate details of what’s immediately near her—the crunch of the snow beneath her plodding boots, the rippling water as she awaits a fish. Wright’s perspective allows Edee to find the peace and serenity Mother Nature offers, but is quick to remind us of her wrath and how vulnerable we really are. Wright plunges us, both as director and lead actor, into the chill or the warmth of both nature and the one human with whom Edee connects. And we happily join her as she learns to not fight her surroundings but embrace them and learn.

Life can be tragic as we see in Edee’s world, but Land gives us an opportunity to see the healing powers of nature. And sometimes, we need to disconnect to reconnect.