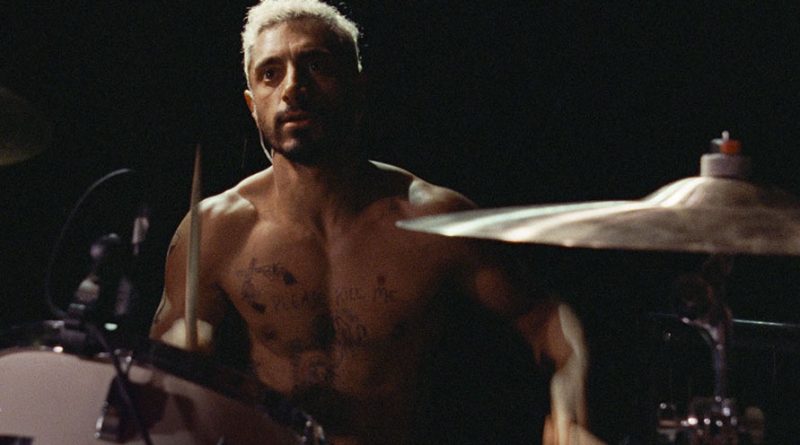 Streaming since mid-December, Riz Ahmed’s amazing performance in Sound of Metal is beginning to garner Award recognition, and he’s a ‘lock’ for an Oscar nomination as Best Actor.

Ahmed plays Ruben Stone, a touring punk-metal drummer who first realizes he’s losing his hearing as he’s setting up his merchandise table before a gig with his bandmate/girlfriend Louise (Olivia Cooke). He’s momentarily confused by a high-pitched ringing in his ears and the muffling of voices.

A recovering heroin addict, Ruben is steered to a secluded sober house for the deaf run by Joe (Paul Raci), a Vietnam veteran who has found serenity in silence.

“Being deaf is not a handicap, not something to fix,” Joe tells him. You don’t need to fix anything here,” dismissing Ruben’s desire to raise the money for expensive bilateral cochlear implants. Instead, Ruben is encouraged to learn American Sign Language (ASL) at the rural retreat.

Scripted by Abraham Marder and co-written by his brother, director Darius Marder, it only superficially delves into the ideological and cultural divide between those, like Joe, who view deafness not as a disability but as an integral part of his identity, and others who view it as a condition that’s correctable with cochlear implants.

Riz Ahmed’s remarkable performance was enhanced by earpieces that blocked even the sound of his own voice, causing a loss of balance and directionality – an acoustic experience created by sound designer Nicolas Becker.

Paul Raci is gratified that, as the son of deaf parent, he could impart authenticity to the part: “In the past, Hollywood actresses like Jane Wyman in Johnny Belinda,, Patty Duke in The Miracle Worker and Julianne Moore in Wonderstruck. Deaf people want to see themselves on-screen. It’s gratifying on so many levels.”

(Notable exceptions include Marlee Matlin in Children of a Lesser God and Millicent Simmonds in Wonderstruck & A Quiet Place.)

FYI: The plot and primary characters are based on Derek Cianfrance’s unfinished documentary Metalhead – in postproduction since 2009.

On the Granger Movie Gauge of 1 to 10, Sound of Metal is an aural, experiential 8, creating an esoteric audioscape via sound design and streaming on Amazon’s Prime Video.