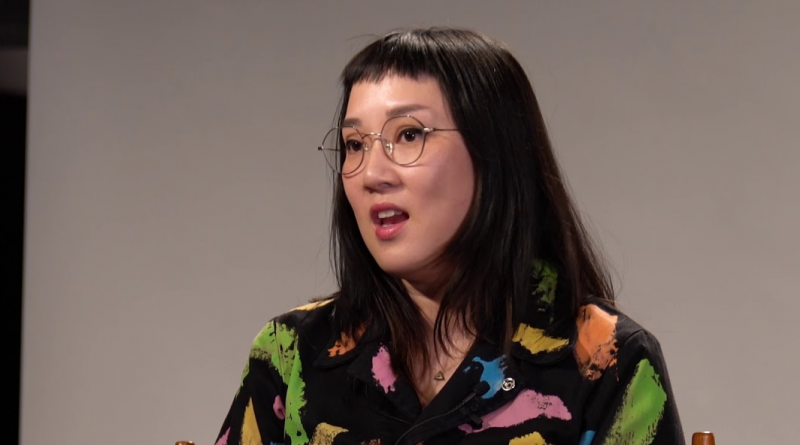 LESLIE COMBEMALE: What was the process of casting Rhea Perlman and how did she go about learning magic for the role? Her character is enigmatic and warm at the same time, and that’s not an easy mix to express.

KATE TSANG: Because Sammy in the film is angry teenage and not going to probably respond well to a mentor type who is overly sweet, I knew when I was writing the character of Margot that I wanted somebody who was warm, but at the same time has grit and toughness to her. I grew up with Cheers playing in my house every week, and so I really first thought of Rhea Perlman as perfect for the role. We reached out to Rhea and really lucky to hear back that she was interested. SO we met up to talk about the role, and she had all these really thoughtful amazing ideas for the character. We connected her and our young star Miya Cech with our magic consultant Kayla Drescher who created all the magic for this film, the technical aspects for it, and she taught them magic tricks and it was really fun to see Rhea and Miya bond over magic, like the characters do in the film. 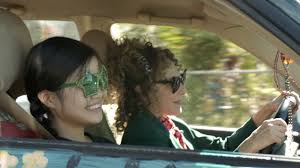 COMBEMALE: I know you’re a magic enthusiast—did that factor into your childhood, or did you find a passion for it later? Are there some of your favorite tricks included in the film?

TSANG: I did not grow up loving sleight of hand magic because I wasn’t really exposed to it. I feel like most people don’t get to watch magic shows in real life that often. I’d seen a few David Copperfield shows on tv growing up, but i’d always been drawn to fantasy films and films with magical realism. That was magic for me growing up. It was only while I was writing the film that I decided to do more research on sleight of hand. I took a magic class and fell in love with it. I met all these women magicians through my class who encouraged me to go further and they became a new community for me. I had moved to LA about 5 years ago and didn’t know anybody and felt kind of alone like Sammy did, and suddenly finding this magic community that was so welcoming and that wanted to teach me their secrets and encouraged me, I really wanted to imbue the story with that feeling. All the tricks in the movie are made up. Kayla Drescher brought them to life. They were created especially for the film.

COMBEMALE: Sammy is 13 and dealing with the loss of her mother, and she’s acting out and grieving in her own way. How did you work to build in Sammy a character that is suffering loss in an authentic way? 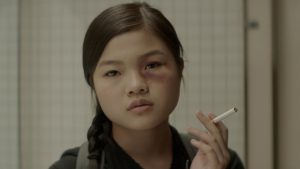 TSANG: With Sammy, I grieved the loss of my own family unit not through the death of a parent but through divorce. It’s only later on that I could see everyone, including my parents, which I could see in a new way as I got older when they became more like individuals in addition to being my parents, that we were all grieving in our own ways. Avoidance or escapism or just anger, which was mine. It was crafting the story of how people deal with grief and pain and what people do with it. Sammy is definitely based on my own grief and anger at the time. I was younger when my parents got divorced, but it was such an ongoing process, I was still working through a lot of it into my teenage years.

COMBEMALE: Miya Cech’s performance as Sammy is very believable. How did you work with her to express the character’s deep feelings of loss and some of the ways she acts out?

TSANG: It was pretty clear from just the audition that she was someone pretty special and she understood and could interpret the material. Miya couldn’t be farther from Sammy, she’s very bubbly and happy. It was through working with her, going through the script, which we did several times, and through her questions about the character that were so thoughtful, it showed me she already understood the character. We didn’t have to mold her in any specific way, because she just got the material.

COMBEMALE: You have a lot of women below the line heading departments. Can you talk about the collaborations with editor Cyndi Trissel, cinematographer Nanu Segal, and production designer Yong Ok Lee?

TSANG: Yong also designed The Farewell and Minari. I brought a look book just to show all the department heads my ideas, so she saw the seeds of my ideas, and Yong just took that and ran with it and made a world we could step into that was beyond anything I could have imagined. She’s really brought the whole world to life. Nanu and I shared a really clear and very connected understanding of the film. So much of it about Sammy’s reality verses Sammy’s fantasy world, and they needed to be two separate looks, and there’s also this mix of comedy and drama, and Nanu just got it and she’s so talented. Also, since we’re shooting a lot of women actors as well, there’s an ease and an understanding and a way a female cinematographer can lens these characters with more of an understanding of them that’s communicated through the camera. With Cindy, she brought so many ideas, because the film was really put together in editing. Some of the ideas, like the animation flourishes that we see as Sammy is writing in her journal and bringing more of that element to the film, that was Cindy’s idea. Using animation to tie in her journal was her idea and it really helped get the audience on Sammy’s side and understand her inner workings in a visual way.

COMBEMALE: I’d like to you to talk a bit about your grandfather—your relationship with him, and how he inspired the character of Margot.

TSANG: My parents got divorced when I was young and I was shuttled back and forth between homes in California and Hong Kong and it was a really isolating experience. I felt really depressed and alone, so my grandfather came over from Hong Kong to watch me. He was I was struggling and he didn’t judge me for it and reached out to me and was the lifeline I needed at the time. I had insomnia and really terrible nightmares and so he would tell me these bedtime stories to help me to go to sleep. They were these really beautiful fairy tales that later on I found out were based his experiences of the Japanese occupation of Hong Kong. He had transformed them into these wondrous stories. He taught me the power of turning something painful into something beautiful and the transformative power of that. That’s the same thing that Margot teaches Sammy. A lot of the relationship is based on the relationship between me and my grandfather. Margot’s generosity, when it comes to opening herself and her magic up to Sammy, is definitely based on the women that taught me magic.