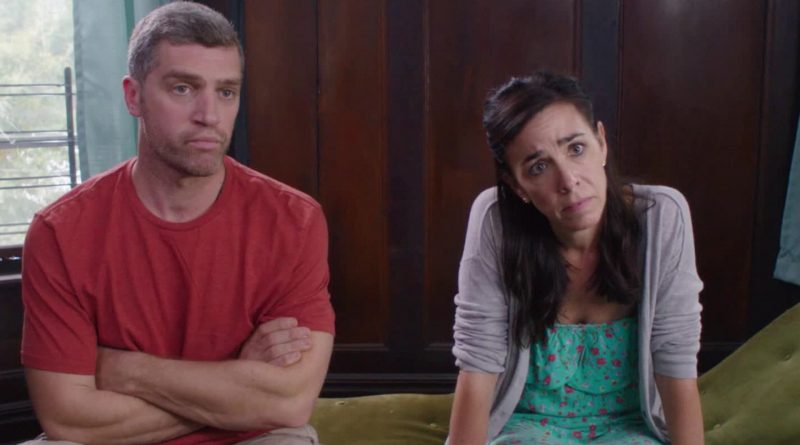 Finnerty Steeves writes and stars in Before/During/After, an honest depiction of a middle-aged woman who looks back on her marriage, how it failed and how to find herself again. Filled with poignant moments, the film never forgets that in many tragic moments, there is also an element of comedy. It’s this balance, the yin-yang of life, that allows for engaging and relatable characters with whom we are quickly invested.

We meet Jennie (Steeves) and David (Jeremy Davidson) on their blissful wedding day as her father (John Pankow) gives a heartfelt toast to the loving couple. We are then quickly ratcheted forward in time to the current day as the couple attempts to heal a broken relationship in a counseling session. We know this doesn’t end with “happily ever after” for this couple, but as we walk in Jennie’s shoes, learning more about each phase of her life with David, we have faith that she can live “confidently ever after.”

The non-linear timeline expands with each scene, allowing us to gain a greater understanding of Jennie’s mindset throughout her marriage. As a successful theatrical actress in NYC, she sits in an audition waiting room, her divorce finalized, and she looks back on her life asking the question, “Where did I go wrong?” For every memory we see, these pivotal points accentuate the slow demise of their 15 year relationship. And as Jennie picks up the pieces of her broken heart, she leans on her support system to regain her strength, balance, and most importantly, her sense of self-understanding.

The film builds on each of these memories creating a solid foundation for this story. The honeymoon phase, the comfortable stage, and as they grow in different directions, the lack of communication phase, all set before us so that we, and Jennie, can see more clearly. Amidst the drama of a relationship crumbling, Finnerty’s portrayal of Jennie has humor and heart. She lets us into her mind, sharing her innermost fears and jealousies, particularly as she auditions for acting parts. Who hasn’t looked in the mirror and wished they were taller, thinner, prettier, always comparing ourselves to others and perhaps blaming these attributes or lack thereof on our failures. And in many ways, Jennie is mourning a loss; a loss of who she thought she was and who she thought she would be. From losing a pregnancy to losing a husband, her future is unclear, and with her honesty, we see ourselves in this character.

Humor is a key element of the film which comes from unexpected characters. Deborah Rush’s oddball perspective as Therapist #4 (yes, the three predecessors are also unique and fun) takes you by surprise and Richard Masur’s hippie and ineffectual methods send a shocking jolt through your system resulting in laughter. And nothing says funny better than a trip to the dentist as Jennie is confronted by the brutally honest hygienist named Olga (Kathleen Chalfant). Of course, it is Steeves’ reactions, never over-the-top, which find the right moments to make us laugh as well as to make us sigh. Again, the balance in the film is pitch perfect and Steeves’ portrayal of Jennie couldn’t be any more authentic.

The uniquely succinct writing gives the script an opportunity to highlight how women think and how our actions may be uniquely female. Jennie’s best friends are all there for her—a safety net—as she deals with the trauma of a divorce. Women tend to need and rely on friends, all very different, to help make sense of the world. And uniquely female, from my perspective, is the ability to form an immediate bond with a stranger as is demonstrated in the character of Juanita (Liza Colon-Zayas), the random paperwork clerk assigned to complete the divorce filing. As this scene becomes a crazy party, not once did I question the possibility of it. Women can connect, bond, and support with uncharacteristic immediacy and Steeves jumps on many opportunities to create scenes like this, many which elicit uproarious laughter.

Before/During/After eloquently uses humor and truth to tell a familiar story of love and healing from one woman’s point of view. Steeves’ intuitive writing and ability to connect us with her character’s plight reminds us of the power we have within ourselves to always move forward, change for the better and grow.