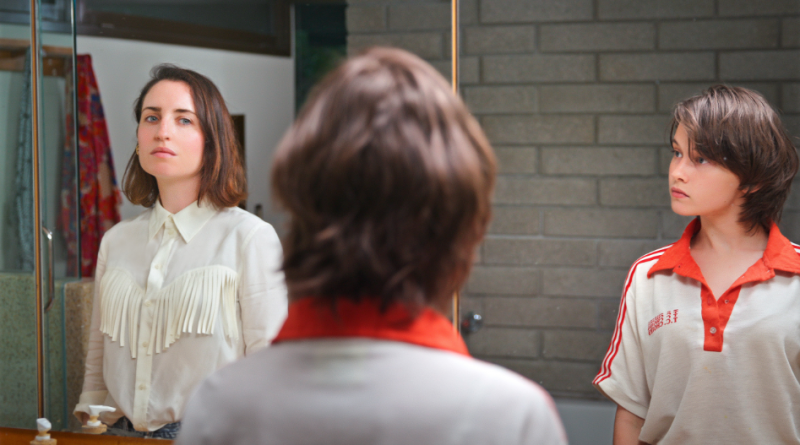 Hats off to Zoe Lister-Jones and husband Daryl Wein for writing, directing, and completing a funny, off-beat film during the Covid pandemic. Lister-Jones also stars in the film as Liza who is planning how she will spend her last day on Earth as three asteroids will be destroying the planet later that night. Walking into her kitchen that morning with an overwhelming need to be alone, there’s a knock and entrance into her home through the back sliding glass door. Liza is less than thrilled to have her “metaphysical Younger Self” (Cailee Spaeny) join her today. Undeterred, Liza plans to spend the day making amends with those she has unresolved issues, attend a party, and perhaps just get plowed by herself until it’s all over.

As we have all learned during a crisis, there’s a rush on certain items. For Covid, we all desperately needed to stockpile toilet paper — an item I still am not quite sure why — and for the end of the world, at least in California, there’s a rush on the dispensary. As luck would have it, she bumps into a stranger (Nick Kroll) who has quite the stockpile having bought the entire inventory. Obtaining what she needs for the finale tonight, she and Young Liza plan out who they will visit, but unfortunately, they must walk all over L.A. as her car was stolen. Bumping into strangers, some with their Younger Selves as well, and hashing out grievances with old boyfriends like Larry (Lamorne Morris), her father (Bradley Whitford), her mother (Helen Hunt) and others, the journey is light and funny given the circumstances, but there’s also an edge of poignancy as it pushes you to ask yourself, “What would I do?” Or “Who would I want to spend my last day with?” Or “Would I want to chat with my younger self?”

Finding a film that elicits that introspection adds another level to the story, but on the surface, it remains light. Taking place over the period of less than 24 hours, we walk (and walk) in Liza’s high chunky-heeled shoes. Each interaction she has is very different, making us laugh either awkwardly or surprisingly, with a list of actors we all recognize. It’s like an all-star cameo film where no one wanted to miss out on portraying odd-ball characters facing the last day on Earth. Fred Armisen is the Younger Self of a 92 year old man, Olivia Wilde verbally pours regrets as she devours an enormous chocolate Oreo cake and drinks wine directly from the bottle, and the list goes on. The variety of characters who Lister-Jones and Wein create keep us happily trekking along the streets, anxious to meet the next character.

Liza and Young Liza are our constants over the course of the day and their friendship is immediately obvious. Of course, with Young Liza being just that, they know each other inside and out, revealing both the fun-loving good side and the darker more troubling one. We laugh as they put their bright red lipstick on, complimenting one another in unison with identical voices, and we connect with them as Young Liza confronts Liza for abandoning her courage. What better day to let it all go that the last day on Earth?

Lister-Jones and Spaeny’s chemistry makes this film and its premise work. Their physical similarities help us jump on board that Spaeny is the younger version of Lister-Jones, but there’s more to it than that. There’s a comfort level that is at once authentic, never forced, that helps us believe in this possibility and without that, this film wouldn’t work. Spaeny gives her character of Young Liza that dose of youthful vim and vigor, unafraid of what she must do over the course of the next 24 hours. Lister-Jones’ Liza has, on the other hand, lived a life filled with career successes and love failures as she looks back with a more jaded point of view. But together, they help one another grow; Liza finding her youthful, carefree outlook and Young Liza understanding the difficulties of adulting.

How It Ends is an unusual depiction of a catastrophic concept with humor and fun yet still finds a way to interject poignant introspection. Using the “metaphysical” portrayal of the Younger Self is uniquely brilliant but unfortunately, underutilized with the other characters. But this is Liza’s story and with she and Young Liza we have a complete picture.