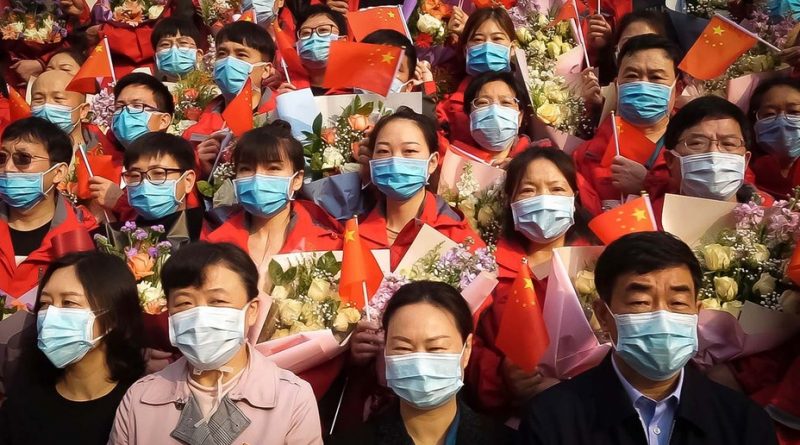 Is In the Same Breath, a film about the rise of COVID-19, a documentary or a horror film? The answer is it’s both, but it’s also a fascinating chronicle of what actually happened inside Wuhan, and how both the Chinese and American people experienced the outbreak.

In it, documentary director/producer Nanfu Wang exposes the misinformation spread by the Chinese government early in the pandemic, which in part lead to the worldwide spread of the disease. Then she shows the subsequent spread in the US and its impact on our country, and on an overtaxed and increasingly emotionally exhausted fleet of healthcare workers.

She got the idea for the film while she was at Sundance 2020, which was exactly the same time Wuhan went into lockdown. Wang had just been in China for the holiday, and had left her son there with family, so her husband had to leave Sundance and go back to get him. As a Chinese-American who grew up in China, she had experienced the propaganda in which all citizens have been immersed their whole lives. She suspected there was far more to the story than the world was hearing, so she decided to create a document of the outbreak. Little did she know how far-reaching the events in China would be.

In Wuhan, very few cameras were allowed to film inside hospitals, but Wang hired several who had gotten permission to go in and do interviews and get footage. Everyone they tried to speak to made them turn off their cameras before they spoke, so she had cameras placed in the hospitals, which filmed 24 hours a day. She had camera people film in ambulances and units where people were being turned away, all while the Chinese government said the disease wasn’t spreading. When one of the filmmakers tried to film at a funeral home, there were 15 cops there keeping him from going in. He almost got arrested. A citizen journalist named Chen Quishi made videos and did interviews exposing the Chinese government’s handling of the virus, racking up millions of views on YouTube, only to disappear on February 6th. In September, he was discovered to be alive, but ‘under government supervision’.

In April of 2020, the government placed the number that had died at around 3000, but the death toll is way way higher. One man who lost a family member said gravediggers at the funeral home complained about having to created 20,000 to 30,000 new tombs. In Wuhan, all funeral homes are run by the state. Since the outbreak, the government had limited any speech from those working there. This kind of a crackdown by the state has led lots of Chinese folks to change how they see their government. Many of them know firsthand about the lies.

Wang also covers the way the US government dealt with the potential for and real arrival of COVID on its shores, and reflects on the protests in the US, attended by people who believe the disease is a hoax. After having seen footage from Wuhan, she knows just how wrong and dangerous this thinking is. Part of the film offers edits of nurses and doctors in both China and the US talking about their experiences of fighting to keep people alive in their hospitals, and in many of the interviews they are breaking down in tears.

Towards the end of the film, Wang considers what difference it would have made if the Chinese government had shown transparency from the very beginning, on January 1st, instead of what they did, which was release news about the punishment of 8 people ‘for falsely spreading rumors about a pneumonia’. In truth, we’ll never know how things could have changed had the government taken earlier action and shared their situation with the rest of the world, but certainly many many less people would be dead.

These kinds of fearless documentaries are essential if we as world citizens are to live together and not inadvertently or intentionally kill each other. In the Same Breath may not lead to any changes in policy in China. In fact, some of the propaganda has led to governments in other countries praising China for their (Wang would argue, fictitious) decisive action. She says in China “disasters become propaganda tools instead of tools for change”. Still, since 2019 we’ve learned that the way outbreaks of diseases are handled around the world makes a difference to everyone’s future. Those responsible for keeping citizens safe should consider that very seriously going forward.