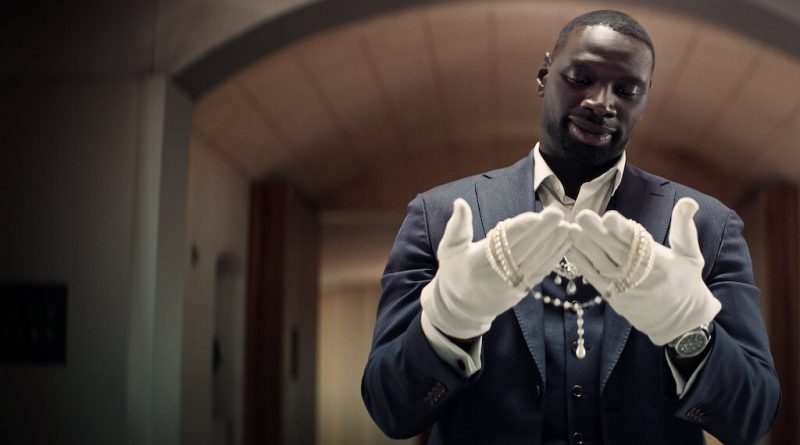 Lupin, The French import on Netflix, is a must see binge, immédiatement!
The five episode series percolates with an energy rarely felt in television fare and is a familiar theme of injustice and abuse of power. The story of one man’s path to clearing his father’s name is woven into a crackling great caper thrill ride with a hell of a cliffhanger. The good news is we won’t have to wait long for the next season of it, promised for this summer.

Premiering earlier in the month, Lupin stars the dashing Omar Sy as the mysterious man of many talents and jobs who is seeking revenge against those who wronged his kind-hearted, clever father, Babakar (Fargass Assandé), a Senegalse immigrant who was employed as a wealthy family’s driver.

The TV series was created by George Kay along with François Uzan, who have crafted our lead character, Assane Diop (Sy) who is a devoted student of the literary character Arsène Lupin, a gentleman thief created in 1905 by French author Maurice Leblanc, introduced to him by his loving father, Babakar.

Arsène Lupin, this monocle wearing gentleman thief is the literary tutor that young Assane Diop is fully immersed in, especially after an unfortunate event that leaves him an orphan. Leblanc’s Lupin offers many salvos and caveats for life lessons proven invaluable to both Babakar and his son Assane. As he matures, Diop sets out to avenge his father for an injustice inflicted by the powerful Pellegrinis, of whom Babakar was employed.

Unbeknownst to Diop until later in the series, the matriarch of that family has quietly funded his education at one of the most prestigious private schools in all of France, out of guilt, bien sur.

Now a world class master thief, Diop out-Bond’s Mr. James Bond and outmaneuvers Tom Cruise in any Mission Impossible film as the man no one can capture or contain. Except for one crafty police detective, Youssef Guedira (Soufiane Guerrab), who initially is scoffed at by the other police who dismiss his theory that an arch thief in Paris has emulated plays right out of the Lupin books.

Diop’s skills of illusion and mastery of the heist are par excellence. Omar Sy delivers a jaw dropping physical and emotional performance as both an elite rascal and a devoted and loving friend and father. And given the physicality of the role, it is masterful how Diop subsumes his identity and becomes another in his various schemes to ultimately get at the Pelligrini patriarch at the root of all the malfeasance.

Sleight of hand, deft of word, and agile like a sleek cat, the large frame of Assane gracefully moves like a parkour artist and wreaks havoc among Paris’ elite coppers and those toadies who serve the Pellegrinis’ worst clandestine assignments.

A moment for the female angle of this testosterone-filled fun watch. The tender moments and the ones where Diop’s heart is on the table are with Claire (Ludivine Sagnier). Since school days she has been his best friend, lover, partner and mother of his son, Raoul (rising star Etan Simon). Claire is kept from the secret world of Diop’s mission and has had enough of the cloaking and dodging of the truth.
The other female role is that of journalist Fabienne Beriot (Anne Benoît). Litigated into abject poverty by Hubert Pellegrini (Hervé Pierre) for her book exposing the Pelligrinis’ financial sins, our proud Beriot is lifted from her broken state by Diop in one of the most enjoyable slices of this excellent series. By chance and sleuthing, Beriot has been found by Diop and is enlisted to help in his mission. Their brief but powerful exchanges and alliance will draw a tear, as it reinforces the power of journalism and the freedom of the press to operate and speak truth to power. Bravo Ms. Benoît!

The story itself is not a heavy violent sledgehammer to the gut like the excellent Gangs of London, but it has a more effervescent and appealing classical bent, think The Count of Monte Cristo meets TV’s The Avengers. The flashbacks sequences are perfectly interspersed to allow us to piece together the backstory as Diop’s entire mission is made clear.

Make sure to catch this thief. It is a rare thing to find this quality of a TV yarn told with the taut precision that Kay and Uzan have rendered with the help of a stellar cast.