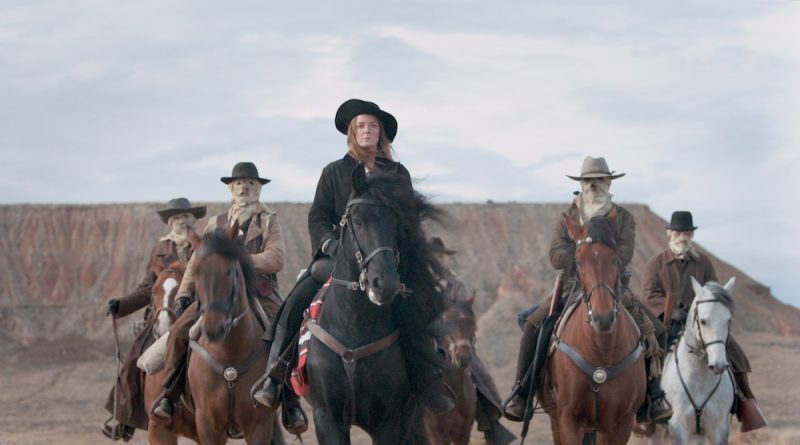 Savage State is not what one might expect from a Civil War film.

A French production written and directed by French writer/director David Perrault, Savage State is a gorgeously realized drama about a family living in Missouri at the onset of the Civil War. Determined to follow Napoleon’s orders to remain neutral in the battle, and with rising tensions and violence in the city, the family patriarch decides to hire a guide to escort the family to the East coast so that they can flee to Paris.

Before this decision, Savage State plays like a rich family drama full of mystery and deep rooted animosity. There’s Layla (Armelle Abibou), the former slave and servant and now a free woman who also happens to be the patriarch’s lover. There the jealous matriarch Madeleine (Constance Dollé) who feels wronged by her husband and his new lover but who seethes quietly, taking every opportunity to lash back. And then there are the three daughters, led by Esther (Alice Isaaz), a willful and headstrong young woman determined to forge her own way even if it goes against everything her family believes.

In addition to the fascinating family dynamics, there’s also the natural drama inherent to the family traversing dangerous territory and unpredictable weather but Perrault incorporates a variety of other stories – a diamond heist gone wrong, the War closing in, and then there’s the escort’s (Kevin Janssen) personal drama which includes a past lover and her creepy gang – and ultimately, the film flounders under the pressures of the various themes it’s exploring.

While it sometimes blunders under everything that is unfolding, the truth of the matter is that I still found Savage State captivating. Christophe Duchange’s cinematography is majestic. Duchange captures the beauty of the landscape and the open mountain ranges while retaining the harshness of the environment. The entire film is accompanied by a spectacular score from first time composer Sébastien Perrault whose haunting soundtrack beautifully accompanies both the performances and the sweeping vistas.

While it’s certainly not to everyone’s tastes, those who don’t mind a bit of a challenge will certainly find much to appreciate and love in Savage State, a western that also doubles as a family drama and a rich story of female empowerment. I also wouldn’t mind getting my hands on that score – truly one of the most lovely and haunting I’ve heard in some time.

Savage State is now available on digital and on-demand.