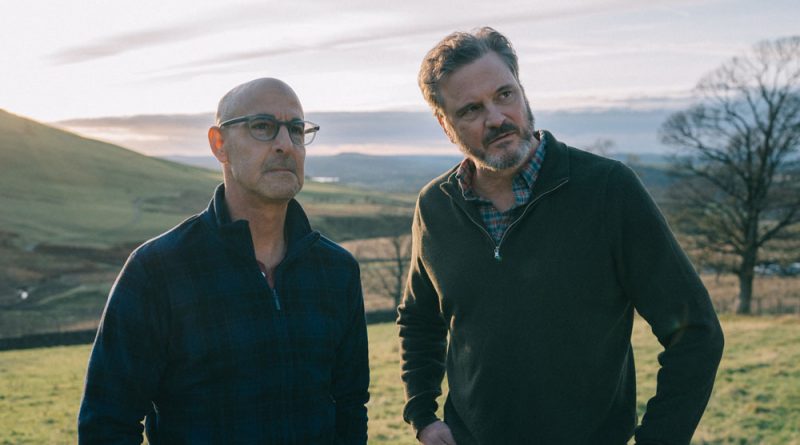 This past year’s shift to streaming has invited an increase in films that don’t need to wow with explosions, car chases, and superheroes battling villains on enormous screens. This has brought some superb, thoughtful character studies with emotional and psychological insights. Writer/director Harry Macqueen’s Supernova falls into that category with moments of heartrending emotion.

We first meet British writer Tusker and American classical pianist Sam, devoted friends and lovers, as they take to the road in their much-used, comfortable Autotrail RV. Sam immediately declares, “We’re not going back, you know,” signaling a literal and symbolic truth, for the couple knows that Tusker has the onset of dementia. Exactly how they grapple with it, both directly and indirectly, is the single focus and exceptional revelation of this affecting presentation of their coping.

The superb acting of Stanley Tucci as Tusker and Colin Firth as Sam reveals the depths of their relationship and understanding of each other, at some moments quietly, at other times through the kinds of trivial, even testy exchanges characteristic of years together. This is not to discount several scenes of touching intimacy with significant reminders for everyone of the extraordinary value of friendship and love. Moreover, Tusker’s awareness of his prognosis elicits the most poignant observations infused with his resignation, even philosophical acceptance of his situation. He says to his sister, whom they visit, “Being sad something is gone just means it was great while it was there, right?” and, more astutely and tragically, “You’re not supposed to mourn someone while they’re still alive.” And quite touching, “I need to be remembered for who I was and not for who I’m about to become.”

Cinematographer Dick Pope captures indoor and outdoor scenes with atmospheric light and exquisite compositions. Shot primarily in England’s Lake District, the environment’s placid calm and enduring beauty add a serene contrast to Tusker’s situation. In addition, the music complements moods, especially Firth’s own piano playing. Though it starts with a less than captivating first act, this is one of those rare films that builds toward a deeply moving third act that earns its staggering conclusion. I can’t imagine anyone with a heart receptive to the honest confrontation of mental deterioration not choking back tears. Supernova is available at select local cinemas and beginning February 16 on demand through several platforms.