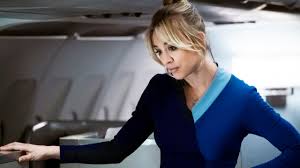 What’s most surprising about the popularity of this eight-part HBO Max mini-series is that its ‘heroine’ is a desperately defiant, self-destructive alcoholic, a condition blamed on PTSD from an abusive childhood.

Kaley Cuoco plays the titular role of good-time-girl Cassie Bowden, which isn’t a far stretch from her stint as sexy party girl Penny in “The Big Bang Theory.” She still mugs, smirks and does double-takes in the same manner, but now she flies international routes for Imperial Atlantic.

As the screwball series begins, hard-partying Cassie flirts openly with 3C, handsome First-Class passenger, Alex Sokolov (Michiel Huisman), including a passionate interlude in the lavatory, and later hooking up for a booze-filled night of debauchery in his hotel room in Bangkok.

When she awakens the next morning, hungover Cassie discovers Alex’s throat is cut. Since she has no memory of what happened, she calls her plucky, level-headed best-friend/attorney Annie (Zosia Mamet) back in New York for advice.

“I’m a crazy drunk flight attendant, not a killer,” she wails, frantically fleeing from the scene of the crime.

Meanwhile, curious FBI agents (Merle Dandridge, Nolan Gerard Funk) are determined to interrogate Cassie and her flight crew cohorts – Megan (Rosie Perez) and Shane (Griffin Matthews), who harbor secrets of their own – about their involvement in the mysterious murder.

Based on Chris Bohjalian’s 2018 novel of the same name, it’s loosely adapted by Steve Yockey (“Supernatural’), who adopts a lighthearted tone for this escapist adventure/thriller, utilizing stylish split screens and a propulsive, piano-driven score by Blake Neely.

Problem is: Cassie’s compulsive alcoholism is treated as amusing which – as anyone who has ever dealt with an alcoholic knows – it isn’t. The only character who seems to acknowledge Cassie’s addiction is her brother Davey (“Grey’s Anatomy” alum T.R. Knight).

On the Granger Gauge, “The Flight Attendant” lifts off with a slick, saucy 6, destined to return for a second season.