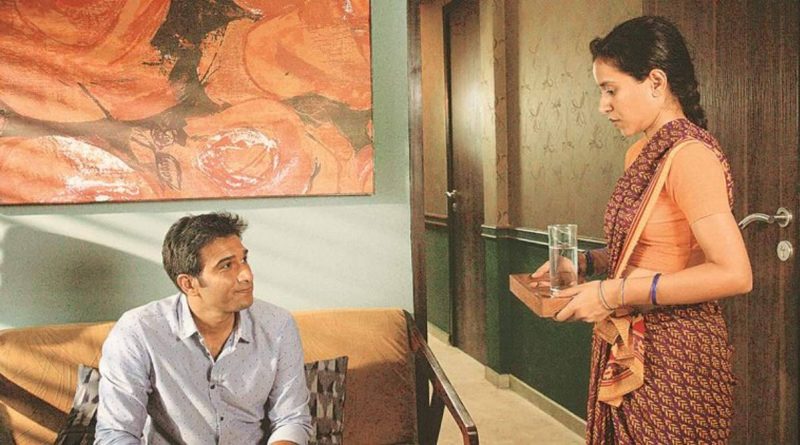 Sir (aka Is Love Enough, Sir?) is a tale of forbidden love. Rohena Gera marks her debut with a heart- warming and poignant story that holds a mirror to the class divide in India.

“People will make fun of us,” Ratna says while acknowledging her feelings for Ashwin. “I don’t care,” he tells her. But she cares.

Rohena Gera’s debut feature film in Hindi, Is Love Enough Sir, holds a mirror to society’s dictates on love and prejudices governed by social status and culture. The film won a Cannes Critic Week award in 2018 and is now streaming on Netflix.

Ratna, a live in maid working at Ashwin’s house is well aware of her position in the household. And the practical woman that she is, Ratna is not carried away by Ashwin’s idea of love. They clearly don’t make a ‘made for each other’ couple.

Set in Mumbai, this story of forbidden love is heart -warming and thought provoking. Tillotama Shome portrays Ratna’s dilemma poignantly and is well supported by Vikram Gomber who plays Ashwin.

Ratna is a typical lower class Indian woman-a face lost in a sea of people. Widowed young she leaves her village to work in Mumbai as a domestic help. Her earnings supports not only her in-laws but also her parents. She is funding her younger sister Choti’s education. Ratna has her own dreams-to become a fashion designer someday.
Ashwin, a writer living in New York comes down to India when his brother fell ill. Subsequently he joins his father’s real estate business. His marriage with Sabina a family friend is in the cards. But something goes wrong and he calls it off.

Living under the same roof, Ratna’s and Ashwin’s interactions are completely that of a master and servant. She prepares his food and keeps the house. He leaves for work in the morning only to return late evening. Many times he does not have dinner at home either. Love was never intended, but gradually an intimacy grows between the two. Continue reading on THE FEMALE GAZE.