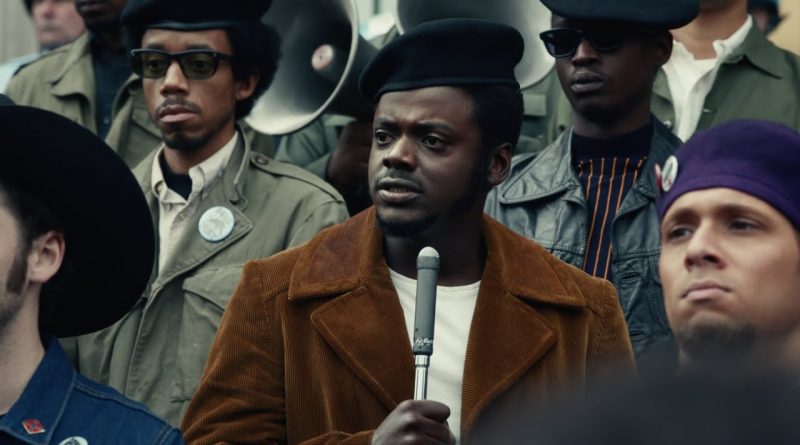 Commemorating Black History Month, Shaka King’s Judas and the Black Messiah focuses on the rise to power of Fred Hampton (Daniel Kaluuya), chairman of the Illinois chapter of the Black Panther Party, and the betrayal that led to his death at age 21 by the F.B.I., working with informant William O’Neal (Lakeith Stanfield).

Bill O’Neal was a petty crook, arrested for car theft in Chicago in 1968, using a fake FBI badge. Since he was obviously skilled at impersonation, he’s recruited by FBI agent Roy Martin Mitchell (Jesse Plemons) to infiltrate the Panthers and bring Hampton down.

Since Hampton’s inflammatory oratory rhetoric included exhortations to kill “pigs,” Hoover calls the Panthers as “the single greatest threat to our national security.”

And the predawn raid on Hampton’s apartment – while he was sleeping next to his pregnant girlfriend, poet/speechwriter Deborah Johnson (Dominique Fishback) – evokes Breonnna Taylor’s murder last year.

Director Shaka King co-wrote the script with Will Berson from Keith & Kenny Lucas’ story, creating a biographical drama that’s remarkably relevant in contextualizing the current Black Lives Matter movement as it relates to policing and the justice system.

“We’ve heard the rallying cry for justice and equality from more voices than ever before,” notes Daniel Kaluuya (Get Out), Golden Globe and Screen Actors Guild nominee for Best Supporting Actor. “As actors, it’s on us to keep our voices raised. To tell our stories – Black stories – and to show these stories are vital…more vital than ever.”

On the Granger Gauge of 1 to 10, Judas and the Black Messiah is an intense, insidious, infuriating 7 – in select theaters and streaming on HBO Max.