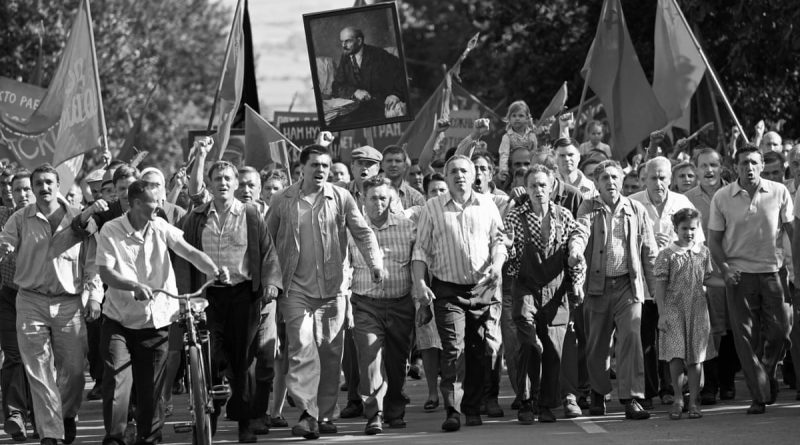 In the opening scenes of Dear Comrades!, June 1, 1962, rumors of food price increases incite a mob scene at a store in Novocherkassk. The desperation of the industrial town’s citizens will not lessen. On the contrary, with a response badly managed by the Regional Committee, tragedy will soon follow after factory workers at the local electromotive plant strike.

As a mob of three thousand marches on the city’s Communist Party headquarters, soldiers grapple with the surge and snipers begin shooting. Amidst hysterical, panicked men and women, a massacre ensues, gut wrenching it its immediacy with the camera at ground level. As confusion reigns, amidst frantic mayhem, the film’s protagonist Lyuda can’t find her eighteen-year-old daughter Svetka. Torn between civil servant allegiance and a mother’s love, Lyuda goes searching for Svetka with the help of her KGB lover.

Against a political backdrop of incompatible attitudes toward Lenin, Stalin, and the current ruler Khrushchev, Lyuda, Svetka, and others debate government policy. Adding context, Lyuda’s father dons his old uniform and tells stories of the 1920s. Events dramatize conflicts among three generations in a cramped, stark apartment and at official meetings ripe with threats and intimidation. Co-writer/director Andrei Konchalovsky writes of his motivation, “The Soviet people . . . who fought in WWII deserve to have a movie that pays tribute to their purity and the tragic dissonance that followed the realization of how different the communist ideals were from the reality around them.”

After meticulous research, insisting on accuracy for this true story, Konchalovsky cast only those actors with a perfect likeness to the Party’s leaders. Further, every background actor and person in the mob received the same attention to verisimilitude. To enhance the documentary feel, cinematographer Andrey Naidenov shot in black-and-white in Academy, that is, television aspect ratio. With its ironic title, Dear Comrades! honors the victims, revealing the horrors, first investigated (with no convictions) thirty years later and, to this day, with some unmarked graves. Dear Comrades! is Russia’s submission for the Oscar in the Best International Film category, in Russian with English subtitles, on Hulu and Video on Demand.