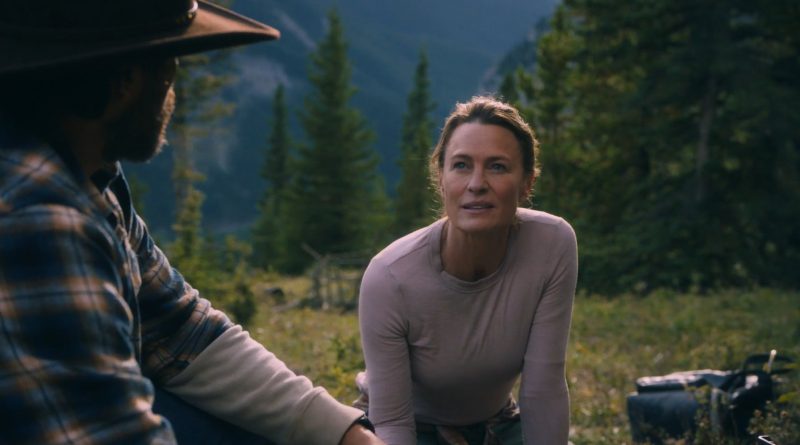 Land means the part of the earth not covered by water, but as a verb, it means to come down through the air to the ground. The latter applies to the title of Robin Wright’s meaningful film, an exploration of boundless grief. It matters little why Edee mourns. It matters how.

Edee’s way is to forsake the life she knew in the skyscrapered city and to become one with pine-treed nature in Wyoming. She throws her cell phone in a wire bin, bounds off the grid, and sets up housekeeping in an old cabin in the woods. She knows nothing about survival although she’s brought cans of soup and a book along. She also brought bandages, which come in handy for sealing the blisters that boil up after she tries to cut wood. She finds a rod and tries to hook a fish. She finds a gun and tries to kill a cervine.

She nearly dies. “Only a person who has never been hungry would think starving is an all right way to die,” says the hunter who finds her. He, too, knows tragedy, so he abides by her rule not to bring anything to her that smacks of the outside world.

Miguel is played warmly by Demián Bichir. Edee’s sister, who pleads with Edee in flashbacks, “Don’t hurt yourself,” is played by Kim Dickens. Robin Wright holds the whole thing together, as she inches toward landing on her feet.

Wright directs Land from a script by Jesse Chatham and Erin Dignam, a script more about silence than dialogue. The few words are floated along on ethereal music by Ben Sollee and Time for Three. Bobby Bukowski’s cinematography exploits the healing of soughing trees and babbling brooks.

So often stories of men battling the elements or surviving in the outback are rehearsed. “Land” tells the story of how a woman manages overweening grief. Land is biblical, natural, admirable.