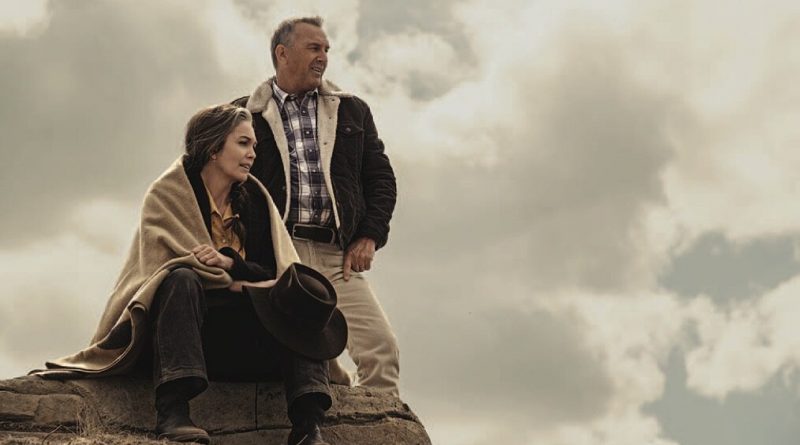 Now available on disc and digital, Kevin Costner and Diane Lane deliver two of the best performances of their careers in this intense neo-Western as Montana grandparents – George and Margaret Blackledge – whose only son died in a tragic riding accident.

Gruff and grizzled, he’s a retired sheriff who keeps his badge and pistol in a bureau drawer. She’s a steely ranch wife who used to ‘break’ wild horses and now bakes Bundt cakes.

In 1963, when their widowed daughter-in-law Lorna (Kayli Carter) marries sleazy Donnie Weboy (Will Brittain), who abuses her and their toddler grandson Jimmy, the Blackledges take off in their 1958 Chevvy station wagon to rescue them from a tight-knit clan of criminals living off the grid in the Badlands of North Dakota.

Dominated by their chain-smoking, volatile matriarch Blanche (Lesley Manville), the Weboys (pronounced “wee-boys”) live in a huge gray farmhouse, seemingly plopped in the middle of nowhere. Intimidating Blanche is cruel and sadistic, believing that overt violence is necessary to maintain control.

Along the way to the inevitable showdown, Margaret befriends a young Native American, Peter Dragswolf (Booboo Stewart), who has his own story of abuse and now lives alone on the prairie.

Based on Larry Watson’s 2013 novel, it’s subtly, sensitively adapted by writer/director Thomas Bezucha, and the title works on several different levels as the story evolves.

If you recall that Kevin Costner and Diane Lane played Clark Kent’s Earth parents in “Man of Steel” (2013) and “Batman v Superman: Dawn of Justice” (2016), you realize their mature, on-screen chemistry is undeniable.