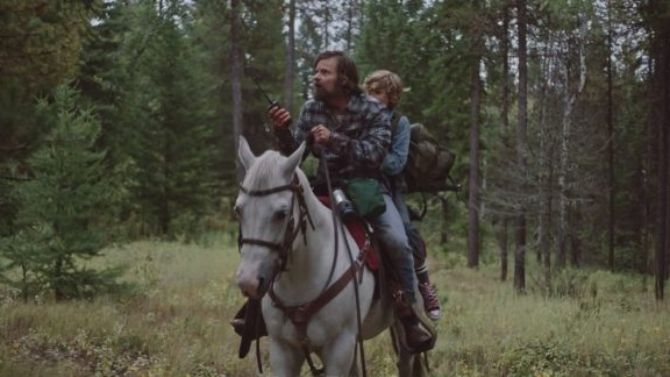 The consequences of denying your loved ones the right to live authentically plays out in dramatic fashion in Cowboys, writer/director Anna Kerrigan’s moving film about a family in crisis. Starring the talented Steve Zahn and Jillian Bell as Troy and Sally, the divorced parents of 10-year-old transgender boy Jo (Sasha Knight), the film ultimately shows the power of unconditional love and acceptance. As the movie opens, Troy and Jo are heading out into the Montana wilderness for what seems like a fairly typical father-son getaway. But we quickly learn that Jo left with Troy without Sally’s permission — largely because Sally is refusing to accept that Jo is really a boy, rather than the daughter she liked to dress up and buy dolls for. Troy has been far more supportive, and Jo thinks that being with his dad is the answer to all of his problems.

Unfortunately, there’s more to the story; flashbacks reveal that Troy struggles with mental health problems. It’s not specifically said, but his manic episodes and unpredictable outbursts — which lead to altercations, confrontations, and, ultimately, prison — suggest that he’s bipolar. He works hard to stay on an even keel, for Jo’s sake, but events conspire to challenge his stability. Soon, he and Jo are being pursued by a dogged sheriff named Faith (Ann Dowd), who can tell that Sally’s version of what happened has some pretty significant omissions.

Cowboys may be set against majestic mountains and raging rivers of Montana (the cinematography is lovely), but its true dramatic impact is fueled by the bravery of a child who finds the courage to stand up for who he really is and the relatability of parents who need to shift their worldview and support him, pronto. Knight, Zahn, and Bell all give excellent, empathetic performances — hopefully, their characters’ journey will help those viewers who need a reminder understand that, in the end, what we all need most to thrive is love.– Betsy Bozdech

Loren King This surprising, affecting film marks the assured feature debut of writer/director Anna Kerrigan. The ease with which the story unfolds, allowing the actors to flesh out the characters, makes this simple yet powerful story so engaging. Set in the gorgeous open spaces of Montana, the natural beauty is countered by the characters’ hardscrabble lives. Steve Zahn, so likable an actor, delivers a winning but never saccharine performance as a manic depressive screw up with a huge heart. He is matched scene for scene by Jillian Bell as his exasperated wife, who works as a waitress in a bowling alley, and is the mother of young Jo (the terrific Sasha Knight) who in one of the most moving scenes in the film declares to her loving dad that she is a boy. The family drama is handled with tenderness and realism even as the stakes rise. Troy and Jo flee into the mountains as dad impulsively decides to take Jo into Canada. The always great Ann Dowd manages to make the small town sheriff who’s determined to find the pair an interesting and refreshing character. In lesser hands, Cowboys might have been sentimental and self-important; Kerrigan and the solid cast infuse it with authenticity and humanity.

Pam Grady: Steve Zahn delivers a potent performance as a father who will do anything to protect his child in this tense drama in which a nurturing impulse leads to life-threatening peril. Young Joe (Sasha Knight) is a trans boy, something his father, Troy (Zahn), accepts but his mother, Sally (Jillian Bell) does not. Complicating the situation further is Troy’s mental illness that leads him to concoct a grandiose plan to spirit his son through thick woods into Canada. Writer/director Anna Kerrigan has penned an insightful sketch that gives lie to the notion that “love is all you need.” Troy and Sally love Joe, and in their very different ways, they both fail him. Ann Dowd lends valuable support as an understanding cop investigating Joe’s disappearance, and Knight and Bell are excellent as a mother and child driven apart by Sally’s blind transphobia. But this is Zahn’s movie, as he depicts a livewire whose unpredictability and unabashed devotion to Joe are riveting.

Susan Wloszczyna: Cowboys takes place in Big Sky Country amid the glorious mountainous terrain of Montana. But the Western tale it tells is driven not by outdated macho clichés but instead shows sincere sensitivity about sexual identity in portraying a young trans boy who comes out to his flawed but sympathetic dad. Mom, however, is not quite so keen on daughter Josie becoming son Joe, foisting pink clothes and dolls on him while he chooses sling-shots and manly leather boots. Read full review.

Leslie Combemale Writer/director Anna Kerrigan brings a fresh story of familial love and fear in the new film Cowboys, which is centered on a ten year old named Joe, who has revealed to his father that though he was born a girl, he knows he’s a boy. His mother is determined to keep Joe as Josie, and his father, though challenged with mental illness for which he must take daily pills, accepts Joe completely as he identifies himself. Cowboys stars Steve Zahn and Jillian Bell as the parents, and newcomer Sasha Knight as Joe, and much of the film is driven by their exceptional performances. In particular, there is powerful chemistry between Zahn and Knight that makes their father/son relationship feel authentic and full of love. Kerrigan was, from the beginning, determined to use a non-binary or trans actor for Joe, and has offered, with this role, a great stepping stone for Knight’s future. Hopefully it will be a future in which he can play both trans and cisgendered roles, which is as it should be.

MaryAnn Johanson Anna Kerrigan completely upends the genre of the Western with this thoroughly modern take on lighting out into the wilderness to find the freedom to find yourself. Everything about that is challenged here, from what true freedom is to how it is not found in solitude. Steven Zahn’s “manly” yet sensitive and accepting dad bumps up against Jillian Bell’s feminist but not openminded enough mom to create a hugely provocative dare to gender expectations, as if to say that even progressive 21st-century norms still have a long way to go. And Ann Dowd’s cop-who-doesn’t-need-a-gun to be effective! Cowboys is an astonishing and very necessary film for this moment right now, when possibilities for big societal change seem within reach, if only we can imagine them. Read full review.

Jennifer Merin Cowboys, writer/director Anna Kerrigan’s engaging first feature, is a contemporary Montana-based western drama about young Jo (Sasha Knight), a transgender youngster who identifies as a boy, but was born into the body of a girl. Jo is struggling to gain acceptance from estranged but loving parents — a mother (Jillian Bell) who insists on frilly dresses and dolls, and a father (Steve Zahn) who, while accepting Jo as a buddy and taking no notice of boyish attire and attitude, is emotionally unstable and must take constant medication to prevent psychotic episodes. Trying to provide freedom of choice, Dad takes Jo into the wilderness on horseback, heading for the Canadian border. A determined Sheriff (Ann Dowd) pursues in what quickly becomes a very dangerous adventure. Kerrigan’s compassionate take on the theme and her characters is appealing, as are the ensemble’s nuanced performances. And the fresh air cinematography is simply breathtaking.

Marina Antunes Sometimes, parents don’t have all the answers. They’re human and make mistakes, just like everyone else. In Cowboys, both Sally (Jillian Bell) and Troy (Steve Zahn) are struggling. Sally can’t come to terms with the fact that her daughter is in transition and does everything to bypass Joe’s (Sasha Knight) attempts to live as a boy and while Troy is accepting of his son, he’s also very sick and sometimes his ideas are better talked out than acted upon. Anna Kerrigan’s film is a beautiful exploration of relationships, family dynamics and coming to terms with change, all the while tackling issues of gender dysphoria and mental illness with disarming ease. Family drama, wilderness adventure, gender, and mental illness all simmer together in Anna Kerrigan’s lovely Cowboys.

Sandie Angulo Chen: Writer-director Anna Kerrigan’s thought-provoking, character-driven drama Cowboys benefits from a standout cast, led by Steve Zahn as Troy, a bipolar father who kidnaps his trans son (played by young actor Sasha Knight) once it’s clear his estranged wife (Jillian Bell) won’t accept or allow their child to live as his true self. The father-son pair leave their hometown in Montana for an adventure in the state’s beautiful wilderness. The drama highlights a cross-section of America rarely seen in movies. Reminiscent of Leave No Trace or even Captain Fantastic — this is another touching movie about unconventional (and mentally ill) men who are nonetheless extraordinary fathers.

Liz Whittemore Steve Zahn is a revelation. His ability to completely live in each role is truly uncanny. He has emotional exhaustion is written all over his face. He’s just a Dad who loves his child, unconditionally. Trans actor Sasha Knight’s performance as Joe is incredibly grounded. He is able to connect with the viewer with the ease of an actor twice his age. It’s really stunning. Writer/director Anna Kerrigan’s script directly addresses gender-normative behavior and how pushing it can be dangerous. Cowboys is a unique coming-of-age tale that also manages to be a father/son road movie. It’s beautiful to see both of these stories on screen.

Cate Marquis A Montana couple, Sally (Jillian Bell) and Troy (Steve Zahn), have vastly different reactions when their 10-year-old, Joe (Sasha Knight), reveals that he is a transgender boy, not a girl. Both are loving parents but Dad quickly adapts to embrace Joe as his son rather than his Tomboy daughter, while Mom refuses to accept it, believing Joe is just enamored with the idea of being a cowboy, and continues to insist on frilly pink dresses and dolls. But as accepting and charming as “cowboy” Dad is, he also is irresponsible, has mental health issues, and has spent time in jail. As the couple heads for divorce, the father runs off into the Montana wilds with his transgender son, with policewoman Faith (Ann Dowd) in pursuit. Writer/director Anna Kerrigan’s well-acted drama is as much about parents embracing children for who they are as about children understanding and accepting the flaws of well-meaning parents.