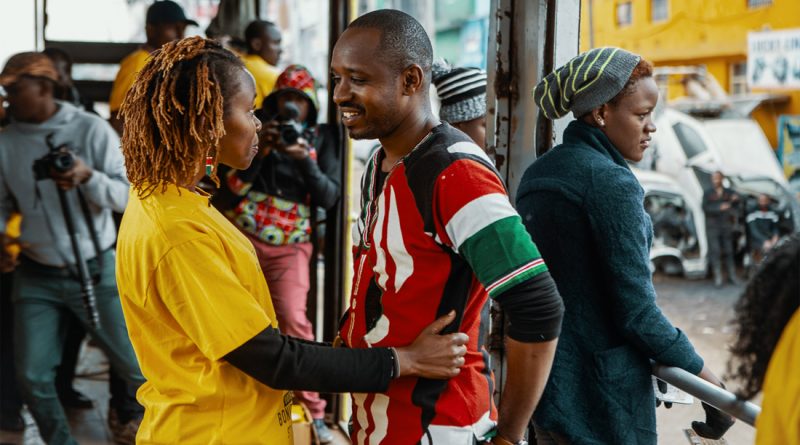 Director Sam Soko’s documentary Softie is described as a tug of war between loyalty to family or country. It presents that and so much more when Boniface Mwangi, nicknamed Softie as a physically small child, decides to run for Kenya’s Parliament. He’ll confront sadistic violence and extensive corruption by those in power amidst death threats to him and his family.

In fact, as reported at the conclusion of the film, over thirty activists died or went missing during this film’s seven years of production. In addition, before the 2017 election, Softie’s wife Njeri and their three daughters seek and gain asylum in the U.S. for eight months, returning just ten days before the election. Eight days before voting begins the head of the digital voting service is killed. Co-writer as well as director, Soko interweaves explanatory archival footage and narration to provide historical context, including British imperialism that exploited tribal identity to turn Kenyans against each other.

But the film is Softie’s, most often called Boni, and Njeri’s. Boni’s motivation to run for office is prompted by all he sees as a first-rate news photographer, twice CNN photographer of the year. After the disastrous aftermath of the 2007 election (more than one thousand dead, five hundred thousand homeless), Boni mounts an outdoor exhibit, aware that the people have been lied to. He decides to run shortly thereafter. His campaign lacks financing, his family needs and misses him, he is arrested and injured, and his opponent Jaguar has money and connections. Campaign manager Khadija Mohammed and Boni press on, appealing to the common sense and decency of fellow citizens.

Struggling to balance the increasing pre-election demands with his family’s needs, Boni often fails. Wisely, Soko increasingly turns his camera on Njeri and the impact on her and the children, a reminder that every politician has a larger life. While some scenes are difficult to watch, Softie—the movie and the man—testifies to the undefeated spirit of the best of us. With multiple awards and Best Documentary nominations, with English subtitles as needed, Softie is available on the Icarus Films website.