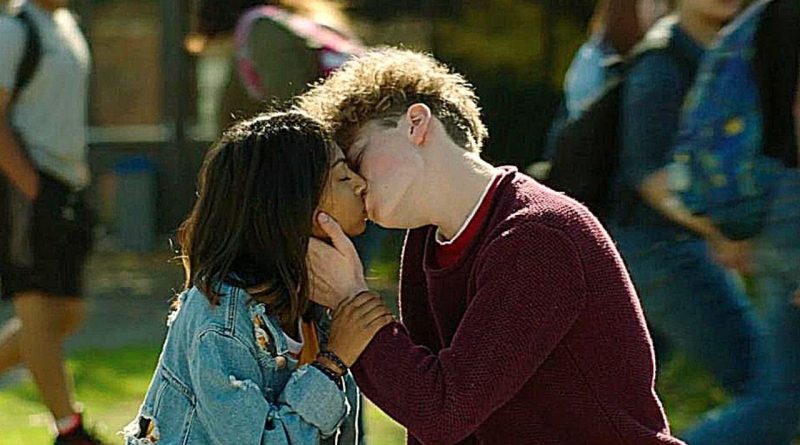 Return with us now to those thrilling days of yesteryear.

Young Hearts debuted at the 2019 Slamdance Film Festival — under the less generic title Thunderbolt in Mine Eye. (The latter is a snippet of Shakespeare from early in As You Like It, which plays a supporting role in the movie.)

At the time, Thunderbolt probably played like a charming Gen-Z rom-com, detailing the slings and arrows of one too-young couple’s first love — and first inescapable heartbreak.

Our guides through this remember-when idyll have known each other almost all their lives — ever since Harper (Anjini Taneja Azhar) was adopted from India at age 3 and moved in across the street from Tilly (Quinn Liebling).

Harper’s a smart, outspoken, basketball-playing freshman — the type who attracts the attention of a popular upperclassman. (Just so he can ask her to do his homework, of course.)

Her older brother Adam (Alex Jarmon) is best buds with Tilly, a gentle, curly-topped drama nerd who’s spending his sophomore year obsessing over his pivotal role in the school’s upcoming production of (you guessed it) As You Like It.

One night, at a gathering neither feels particularly comfortable attending, Harper and Tilly take the first tentative steps toward what they assume will be a lifetime of blissful togetherness.

Alas, inevitable pressures from inside and outside their magic bubble threaten Harper and Tilly’s not-so-unshakable bond. (Among the latter obstacles: society’s still-going-strong double standard and teenagers being their unavoidably immature selves.)

Most of all, however, Young Hearts benefits from the individual performances of — and palpable chemistry between — Azhar and Liebling.

Separately and together, they capture the bittersweet challenges of finding someone special — while finding yourself — with endearing awkwardness.